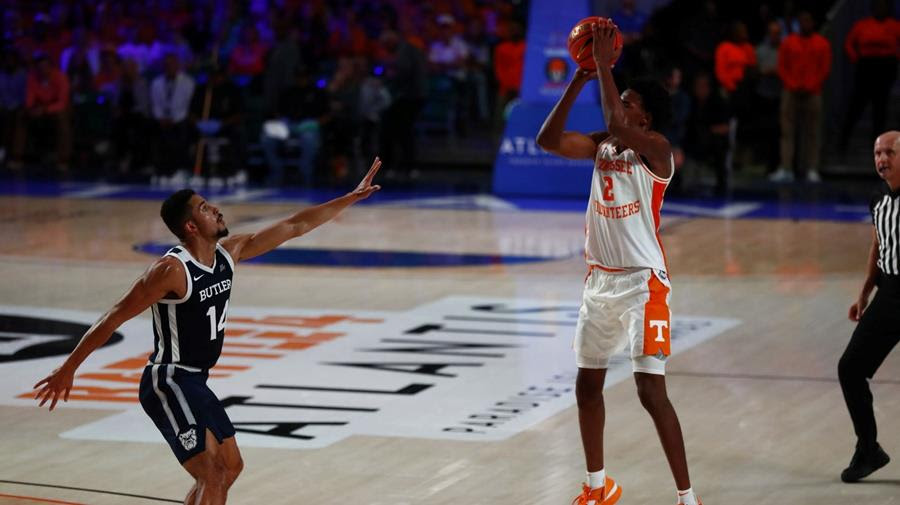 PARADISE ISLAND, Bahamas – Despite a slow start on the offensive end, No. 22 Tennessee found its rhythm and used a monster second half to cruise by Butler Wednesday night in its Battle 4 Atlantis opener, 71-45.

Santiago Vescovi led the way offensively for Tennessee with 13 points—all of which came in the second half. Julian Phillips added 11 points, while Zakai Zeigler was the Vols’ third double-figure scorer with 10 points. Olivier Nkamhoua and Tyreke Key scored nine points apiece.

After Tennessee closed the first half on a 10-0 run, the teams played back and forth to open the second half until a quick spurt by Butler cut Tennessee’s lead to just two points at 36-34 with 14:47 remaining.

The Vols then responded to the Bulldog threat with a 17-1 run to extend their lead to 18 points and take control of the game. Tennessee never led by fewer than 14 and led by as many as 28 points late in the second half.

Vescovi spearheaded the 17-1 run for Tennessee, draining three 3-pointers and recording a steal and fastbreak layup.

Tennessee started slow, but ended strong in the first half and took a 28-23 lead into the halftime break.

With the Vols trailing 23-18 at the under-four media timeout, Jahmai Mashack hit a driving layup that sparked a 10-0 Tennessee run to end the half—capped off by a deep 3-pointer from Zeigler at the buzzer.

Overall, the Vols forced 13 Butler turnovers—and had 10 of their own—in an opening period that was a defensive slugfest on both ends of the court.

Offensively, Tennessee missed 11 of its first 16 field goal attempts and scored just 11 points in the first 12 minutes of action.

UP NEXT: With the win, Tennessee advances to Thursday’s Battle 4 Atlantis semifinals against USC, who defeated BYU on Wednesday, 82-76. Tip-off is set for approximately 1:30 p.m. ET on ESPN2.

DEFENSE TRAVELS: For the third time this season, Tennessee held its opponent to under 33 percent shooting from the field for the game, as Butler finished the night shooting 31.9 percent (15-for-47) from the field.