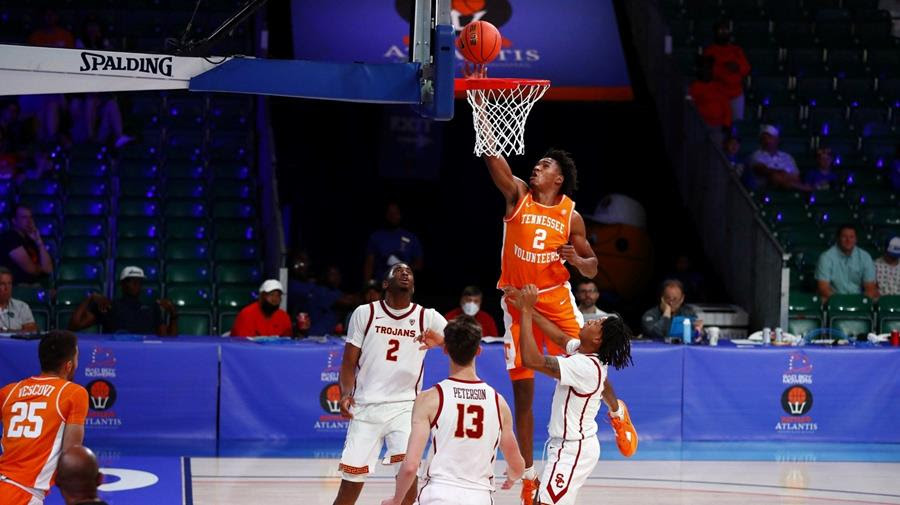 PARADISE ISLAND, Bahamas – No. 22 Tennessee came out on top in a back-and-forth affair Thursday in the Battle 4 Atlantis semifinals, outlasting USC in overtime, 73-66.

Tennessee and USC played back and forth for the first three minutes of the overtime period, as Trojan guard Boogie Ellis’ baseline jumper knotted the score at 66 with 2:09 remaining in OT.

On the ensuing trip down the court, Santiago Vescovi drained a 3-pointer from the wing as the shot clock wound down to give the Vols a 69-66 lead.

From there, Tennessee (4-1) forced three straight USC turnovers and Zakai Zeigler was 4-for-4 at the line to seal the win.

Freshman Julian Phillips paced the Vols offensively all game, finishing with a career-high and game-high 25 points on 7-for-13 shooting. He also pulled down eight rebounds and was 10-for-12 at the free-throw line.

Olivier Nkamhoua also scored in double figures for the Vols, registering a 12-point, six-rebound performance on 5-for-8 shooting.

With Tennessee trailing 62-60 with just over a minute to play in regulation, Phillips found Nkamhoua on the block for a contested layup that tied the game.

On the subsequent possession, the Vols forced a missed USC 3-pointer and Phillips gathered the rebound with 34 seconds remaining. Tennessee had a shot to win the game in the closing seconds, but Vescovi’s 3-point attempt was off the mark.

After Tennessee took a three-point lead into the halftime break, USC threatened to pull away out of the gates in the second half—outscoring the Vols 11-4 in the opening five minutes of the period to pull in front by four points at 45-41.

As he did many times over the course of the game, Phillips had an answer for the Vols—getting to the rim for an and-one layup that kicked off a 10-0 Tennessee run and put the Vols back in control.

After USC ended that Tennessee run with a jumper from Kijani Wright, the two teams played the remainder of regulation in an eight-point window—with neither team leading by more than four points.

Tennessee led for nearly the entirety of the first half and took a 37-34 lead into the halftime break.

The Vols extended their lead to as many as eight points with 1:13 to go in the opening period when Mashack stole a USC inbounds pass, took the ball the length of the floor and threw down an and-one slam to put Tennessee ahead, 37-29.

USC responded however, scoring the half’s final five points—including a buzzer-beating 3-pointer from Boogie Ellis to bring the Trojans within three points.

After a slow offensive start to Wednesday’s opening game in the Bahamas against Butler, Tennessee was much quicker out of the gates Thursday—shooting 42 percent from the field during the first half.

Phillips, who recorded a career-high-tying 11 points against Butler on Wednesday, achieved a career-high in scoring during the first half alone with 13 points on 4-for-7 shooting.

UP NEXT: With the win, Tennessee advances to Friday’s Battle 4 Atlantis championship game against No. 3 Kansas, who defeated Wisconsin on Thursday in overtime, 69-68. Tip-off is set for approximately 7:30 p.m. ET on ESPN.