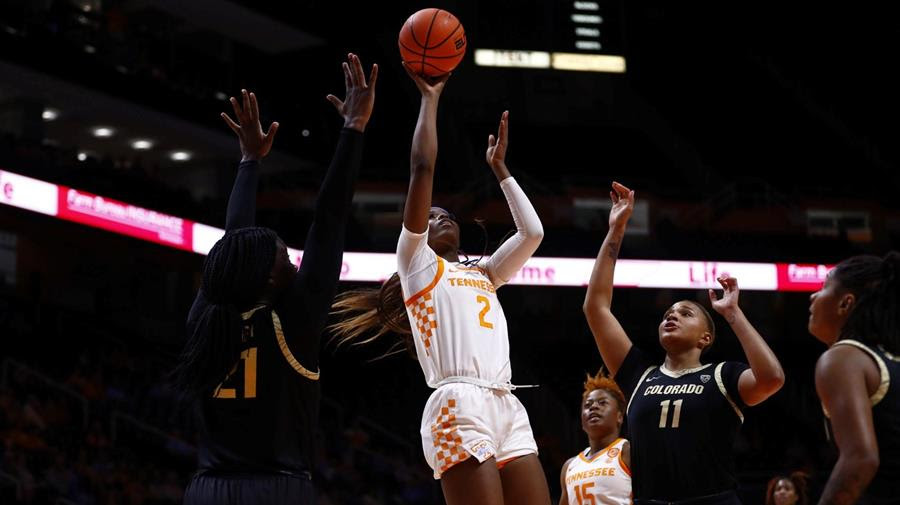 KNOXVILLE, Tenn. – Keeping control throughout the game, the No. 23/24-ranked Tennessee Lady Volunteers got back in the win column in their return to Rocky Top, defeating Colorado 69-51 Friday night at Thompson-Boling Arena.

It was a masterful showing on the offensive end for Jordan Horston and Rickea Jackson on their home court. The duo scored 23 and 20, respectively, shooting a combined 18-of-25 (72 percent) from the floor. Horston was UT’s leading rebounder, securing eight boards, followed closely by Jackson who had four. Horston also tied for the team high in assists with Jasmine Powell, dishing out four vs. the Buffaloes.

As a team, the Lady Vols fired at a 48.1 percent clip, going 26-of-54, and were ruthless on the defensive side, swiping away 15 total steals. Jackson and Horston accounted for four each. Karoline Striplin was a force in the fourth quarter, swatting away three Colorado (4-2) shots in the final period alone. Tennessee did a superb job turning takeaways into points, as the Big Orange outscored CU 24-8 in fast break points and owned the paint to the tune of a 34-22 advantage.

The Orange & White never trailed in the game, building a lead as large as 24 points in the third quarter. Its stifling defense showed up in the box score, as the Buffaloes put up just 14 points in the first 20 minutes of action.

Colorado finished with three double-digit scorers, led by Kindyll Wetta with 13. Jaylyn Sherrod totaled 11, while Aaronette Vonleh netted 10. Its leading scorer for the season at 17.2 ppg., Quay Miller, was held to only three by the Big Orange.

The night started quietly, but the Lady Vols picked up the pressure as the first quarter came to a close. Shortly after the media timeout, Tennessee rattled off a 9-2 run for the final 2:47 of the frame, highlighted by six Horston points and an emphatic tip-in with just two ticks left on the clock. After 10 minutes of play, the Big Orange led 17-9, thanks to 50 percent shooting from the floor (8-of-16) and 11 boards to Colorado’s four.

Tennessee put the clamps on the Buffs in the second. CU would shoot just 2-of-13 (15.4 percent) from the field, scoring just five points in the quarter, tying for the ninth-fewest opponent points in a quarter in program history. On the offensive side, Jackson found her rhythm, cashing in six points and pulling down four boards. Tennessee entered the locker room at halftime holding a 30-14 lead.

Both offenses erupted in the third quarter, as the Lady Vols won the stanza, 27-21. Three UT players accounted for 25 of those points, as Horston had 10, complemented by eight from Jackson, who made all three shots from the field in the third, and seven from Jillian Hollingshead. Tennessee owned a 22-point advantage, 57-35, after three periods of play.

Colorado seemed to get it started on the offensive end, but Tennessee shut down any inklings of a rally quickly, swatting away five Buffalo shots and swiping another five in the final 10 minutes of play. Jordan Walker helped salt away the finish, getting to the line and knocking down four free throws. Tennessee allowed no field goals in the last 3:21 and forced the Buffs into four turnovers during that time frame, finishing off the victory back on Rocky Top.

UP NEXT: The Lady Vols will play game two of a six-game homestand on Sunday, hosting Eastern Kentucky in a 2 p.m. ET contest that will be streamed on SECN+.

DEFENSE STARTING STRONG: The Lady Vols limited the Buffaloes to just nine first-quarter points and five second-quarter points. It was the first time this season the Buffaloes scored less than 12 points in an opening period and marked their fewest first-half point total. It was also the first time Tennessee had held an opponent to single-digit scoring in a first quarter this season and the fewest points they’ve given up in a first half this season as well as a second quarter.

BACK ON THE BOARDS: UT won the battle of the boards against the Buffaloes, out-rebounding them 38-33 on the night. The Lady Vols have now won the rebounding battle four times on the season and in three of the last four contests.

TAKING CHARGE: Graduate Jordan Walker took a charge in the first quarter against the Buffaloes, logging her fifth of the season to lead the team in charges drawn.

DYNAMIC DUO: Seniors Jordan Horston and Rickea Jackson led Tennessee in scoring for the fourth straight game, marking the first game of the season in which UT has had two players with 20 or more points. Horston has scored in double figures in every game in which she’s been active and completed the contest, and Jackson has tallied 14 or more in every game except the opener against Ohio State. The duo has combined for 216 points on the season, just over 42 percent of Tennessee’s 514 total points.