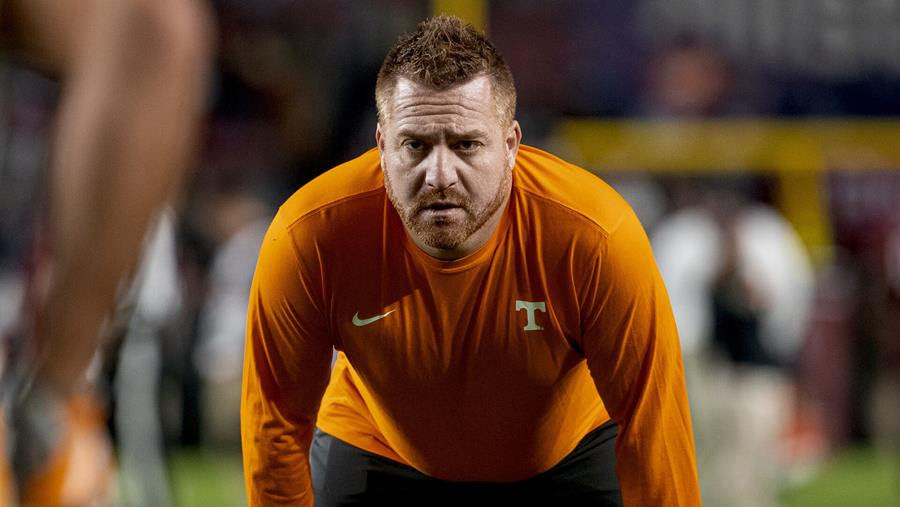 LITTLE ROCK, Ark. – After leading the nation’s top-ranked offense during the 2022 regular season, Tennessee offensive coordinator and tight ends coach Alex Golesh has been named one of five finalists for the Frank Broyles Award, as announced by the Frank & Barbara Broyles Foundation on Monday.

The Broyles Award is presented annually to the top assistant coach in the country by a selection committee of distinguished former head coaches, broadcasters and members representing the Football Writers Association of America (FWAA).

Golesh is just the second Tennessee assistant to ever be tabbed a finalist for the prestigious award, joining former offensive coordinator and quarterbacks coach David Cutcliffe, who was a finalist in 1997 before winning the award in 1998.

In his second season with the program, Golesh has taken UT’s offense to new heights while helping lead the Volunteers to their first 10-win regular season since 2003. Tennessee has scored 30-plus points in 11 of its 12 games and has eclipsed 500 yards of total offense nine times this season.

Through the conclusion of the regular season, the Vols lead the FBS in scoring at 47.3 points per game, nearly a full three points ahead of second-place Ohio State (44.5). The Big Orange also rank No. 1 nationally in total offense, averaging an incredible 538.1 yards per game, nearly 16 yards more than second-place Washington (522.2). They lead the country in yards per play (7.35), passing efficiency rating (181.59) and rushing touchdowns (39), as well.

The impact of Golesh’s up-tempo offense over the last two seasons has been remarkable for a program that ranked 108th in the FBS in scoring (21.5 ppg) and 102nd in the FBS in total offense (346.2 ypg) a year prior to his and head coach Josh Heupel‘s arrivals.

One season after setting eight team single-season records, the Vols have already shattered program records for total points (568) and touchdowns (75) with a bowl game still left to play and are on pace to set a handful of other records this season.

Golesh is in his 19th season at the collegiate level having enjoyed success at every stop of his career. Prior to spending the 2020 season as the co-offensive coordinator and tight ends coach at UCF, he served as the tight ends coach and recruiting coordinator at Iowa State from 2016-19 on Matt Campbell’s staff.

Golesh grew up in Brooklyn, New York, and earned a bachelor’s degree from Ohio State in 2006. He got his start in the coaching profession as a student assistant with the Buckeyes.