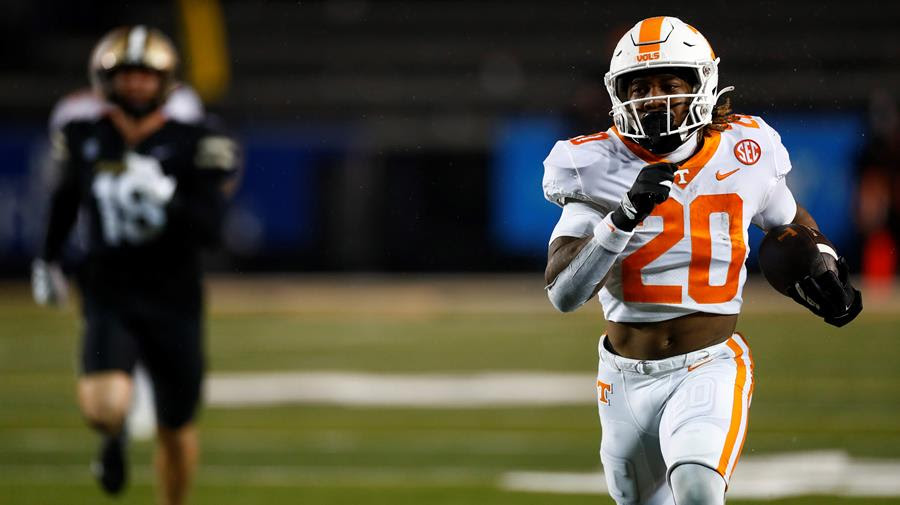 With Saturday’s victory, Tennessee (10-2, 6-2 SEC) secured its first 10-win regular season since 2003 and its first overall 10-win season since 2007, accomplishing the feat in the second season under head coach Josh Heupel while amassing a single-season school record of 568 points.

The Big Orange put up 513 yards of total offense on a rainy night in Nashville, including a season-high 362 rushing yards on 31 attempts to establish a new school record for yards per carry—gaining 11.7 yards per rush. The mark topped the previous program standard of 10.7 yards per carry in a 68-0 win over Tennessee Tech on Oct. 27, 1951.

Tennessee’s stable of running backs combined for five touchdowns, including an 83-yard scoring burst from sophomore Jaylen Wright, an 80-yard dashing touchdown by freshman Dylan Sampson and a 52-yard scoring sprint by junior Jabari Small. Wright led the charge with a career-high 160 yards on only five attempts (32.0 yards per carry), while Sampson turned in first career triple-digit output with 131 yards on 12 carries.

With two scores each on Saturday, Small (12) and Wright (10) become the first Tennessee duo with 10 or more rushing touchdowns in a single season since Jalen Hurd (12) and Joshua Dobbs (11) did so in 2015.

Not to be outdone, the Tennessee defense posted its first shutout of an SEC opponent since a 48-0 blanking of Vanderbilt on Nov. 22, 2003. Eleven different players recorded at least a half-tackle for loss as the Vols piled up a season-high 13.0 stops behind the line of scrimmage, led by edge rusher Roman Harrison who posted a career-best 2.5 TFLs. Defensive backs Tamarion McDonald and Wesley Walker each finished the contest with a game-high eight total tackles, while McDonald and linebacker Jeremy Banks both logged a pair of pass breakups.

For the game, Tennessee limited Vanderbilt (5-7, 2-6 SEC) to 254 total yards and 3.3 yards per play. The Commodores finished the night 3-of-17 on third down conversion attempts and 0-of-4 on fourth down.

Making his first start of the season and third of his Tennessee career, redshirt senior quarter back Joe Milton III completed 11-of-21 passes for 147 yards and one touchdown with no interceptions. Junior wideout Jalin Hyatt pulled in three catches for a game-high 86 yards, improving his season total to 1,267 which stands 31 shy of the program record set by Marcus Nash in 1997.

Special teams prowess was on display as well with the Vols racking up a Heupel-era high 116 punt return yards, highlighted by a 73-yard touchdown from return specialist Dee Williams. The junior from Forsyth, Georgia, also forced Tennessee’s lone takeaway of the ballgame on a Vanderbilt fake in the third quarter, knocking the ball loose from Commodore punter Matt Hayball before sixth-year senior Nick Humphrey pounced on the pigskin and logged his first career fumble recovery.

The Vols wasted no time getting on the scoreboard, using 55 seconds of game clock to strike first on Small’s three-yard touchdown plunge in the first quarter. The score was set up by a 61-yard connection from Milton to Hyatt down the left sideline, good for Hyatt’s fifth 60-plus yard catch and Milton’s third 60-plus yard pass of the season.

Tennessee doubled its lead late in the first quarter, orchestrating a methodical 11-play, 76-yard touchdown drive capped by Fant’s one-yard, fourth-down dive into the end zone with 1:57 to go in the opening stanza. The series was highlighted by Wright’s 15-yard rushing burst and a 23-yard throw to Ramel Keyton that placed the Vols inside the red zone.

Vanderbilt had a chance at points early in the second quarter after Harrison’s sack on third down forced a 39-yard field goal try. Commodore placekicker Joseph Bulovas stepped in and pulled the kick wide left to leave Vandy’s deficit at 14 points with 10:48 remaining in the second quarter.

Explosiveness was showcased throughout the second half with Tennessee recording four rushing touchdowns longer than 50 yards. Small and Wright each broke off rushing scores early in the third quarter, catapulting the Tennessee lead to 35 points with 10:43 left in the third quarter. Small bolted 52 yards into the end zone for his 12th touchdown of the year, tying for ninth in single-season school history, while Wright flashed a 50-yard score for his ninth touchdown of the 2022 campaign.

Milton capped the third-quarter scoring with his first touchdown of the night, firing a seven-yard strike to Nashville area product Walker Merrill. The sophomore receiver from Brentwood hauled in his third career score, and the Vols took a 42-0 lead over the Commodores with 4:53 remaining in the third quarter.

Wright and Sampson provided the exclamation point with 83- and 80-yard rushes for touchdowns, respectively, in the fourth quarter, pushing the Tennessee lead to 56 points for the most lopsided SEC shutout by the Vols in 28 years (65-0 at Vanderbilt, 1994).

With the regular season wrapped up, the Vols await their postseason destination. Bowl matchups are set to be announced on Sunday, Dec. 4.