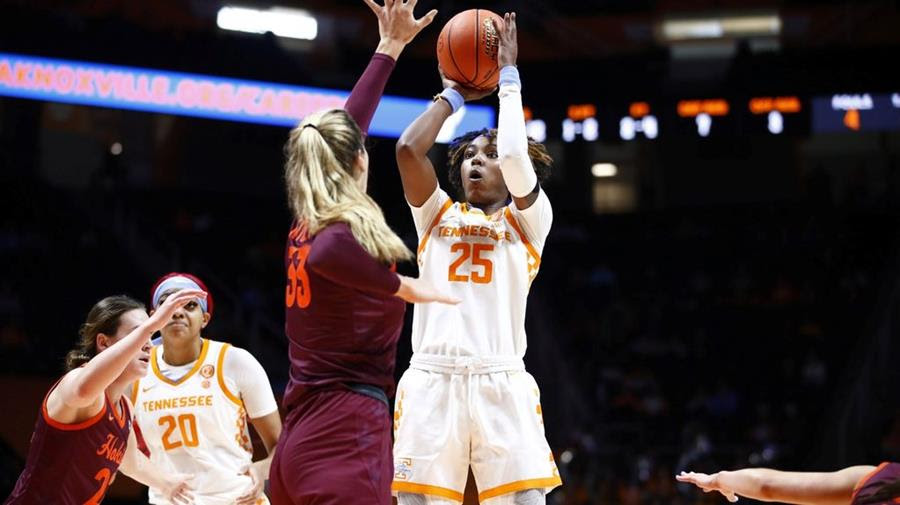 KNOXVILLE, Tenn. – Senior Jordan Horston recorded her second double-double of the season on Sunday, as RV/RV Tennessee battled No. 9/9 Virginia Tech down to the wire in a nail-biter before coming up short in Thompson-Boling Arena, 59-56, in the 2022 Jimmy V Women’s Classic.

Four players were in double figures for the Hokies (8-0), with Kayana Traylor leading the effort with 18. Cayla King turned in 11 points and Georgia Amoore and D’asia Gregg each finished with 10.

VT jumped out to a 6-0 lead early before Powell got the Lady Vols on the board with a trey three and a half minutes into the game. Tennessee struggled to find a rhythm on offense, as VT heated up from behind the arc to lead 14-5 by the media timeout. A 3-pointer by Traylor extended that lead to 12 before Horston drove into the lane to end the drought for UT. Key followed it up with a bucket from the block on the next possession to whittle the deficit down to single digits by the 3:32 mark. The teams traded buckets through the end of the quarter with the Hokies scoring last to lead by 10 at 23-13.

Marta Suárez scored on Tennessee’s first possession of the second period, and VT responded with a trey on the other end, but the Lady Vols battled back within seven by the 7:05 mark. Another 3-pointer by the Hokies stretched their lead back to 10 by the midway point of the quarter, but Horston answered with a three of her own and followed it up with a layup to set off a 7-0 run that pulled the Lady Vols back within three with 2:14 to go. Amoore hit Virginia Tech’s sixth and final three of the half with just over 90 seconds to play, but a pair of free throws by Horston set the halftime deficit at four with a score of 34-30.

Both teams came out hot in the second half, scoring on each of their first two possessions, but Tennessee then hit a scoring slump while the Hokies racked up a 10-0 run to lead 46-34 three and a half minutes into the third quarter, forcing a Lady Vol timeout. Coming out of the huddle, the Big Orange cut it back to 10 off a pair of free throws by Horston, and two more by Tess Darby on the next possession pulled UT within eight. Virginia Tech once again led by 10 following a 3-pointer by Gregg at the 2:16 mark, but Horston scored the final bucket of the period on the fast break to send the game into the final stanza with the Lady Vols trailing 51-43.

Powell cut the deficit to six with a jumper 12 seconds into the fourth, but Traylor responded with a bucket on the other end, and the game became a back-and-forth affair with the score standing at 55-47 with five minutes left in the game. Both teams struggled to score following the final media timeout, but with 3:47 to go, Key blocked a shot under the VT basket, and Horston turned it into two points from the free-throw line on the other end. Powell found Key down low on UT’s next possession, and Key beat her defender, hitting the short two to pull the Lady Vols within four at 55-51 with just under three minutes remaining. The Lady Vols got a couple looks on offense but couldn’t convert before Kitley hit a jumper to stretch the lead back to six with just under a minute to play. Key responded with a six-foot jumper on UT’s next possession, and Horston came up with a steal with 30 seconds to play and hit the second of a pair of free throws to pull the Big Orange within three with 23 seconds on the clock.

Tennessee fouled Gregg on the inbounds, and she hit one free throw, giving the Lady Vols the ball back with 15 seconds to play. Horston nailed a jumper with nine seconds left in the game to move UT within two at 58-56, and Powell tied the ball up on the inbounds pass with the possession arrow in Tennessee’s favor. Horston got an open jumper on the baseline, but it bounced long off the rim, and VT hit the second of a pair of free throws to hold Tennessee off with a final score of 59-56.

UP NEXT: The Lady Vols will be back in action in Thompson-Boling Arena on Tuesday, hosting Chattanooga in a 6:30 p.m. ET contest that will be streamed on SECN+.

DROPPING 20+: With 26 points against VT, Jordan Horston logged UT’s sixth 20+-point effort of the season. With three on the year, Horston accounts for half of UT’s individual performances of 20 or more points.

DOMINATING THE PAINT:  The Lady Vols out-rebounded the Hokies 46-31 to win the battle of the boards for the fourth straight contest and sixth game of the season.

KEY ON DEFENSE ONCE AGAIN: After holding 2022 ACC Player of the Year Elizabeth Kitley to four points on 1-of-12 shooting last year, Tamari Key and UT’s inside game limited the All-American to six points on Sunday via a 3-for-13 day from the field.