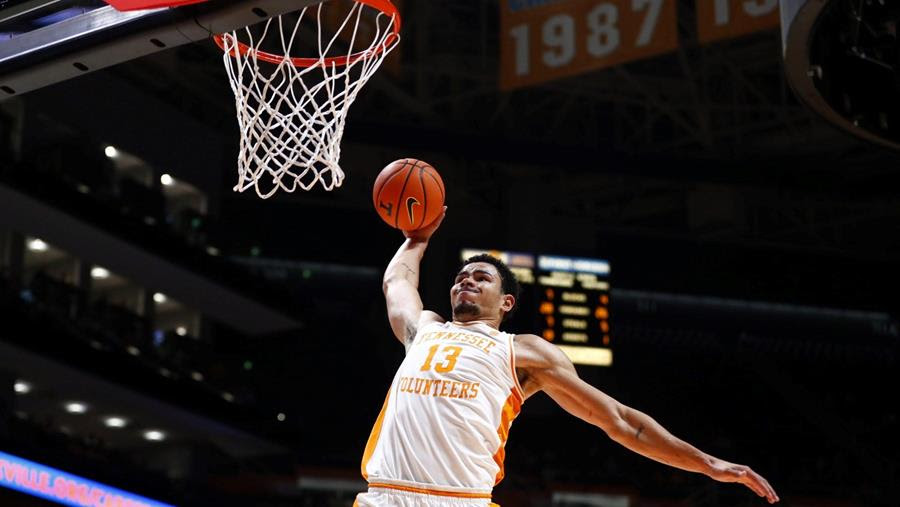 While defense once again highlighted the game for the Big Orange, the offensive side of the floor showcased balance and the ability to capitalize on opportunities. The Vols forced McNeese (2-6) into 24 turnovers on the night, 10 coming by way of the steal, and also swatted away 10 shots. Then, on the other end of the floor, UT outscored the Cowboys 30-4 in points-off-turnovers. Four different Vols scored in double-figures, and an unselfish offensive attack saw Tennessee record an assist on 21-of-23 made baskets in the game, with the two non-assisted buckets being put-backs.

The offense was led by reigning SEC Player of the Week Santiago Vescovi, who was a sparkplug Wednesday, generating a team-high plus/minus of +37 in 33 minutes played. He led the squad in scoring, sinking 16 points, while draining four shots from beyond the arc.

The offensive attack largely ran through ftrue freshman Julian Phillips, who led the team with four assists and added 12 points. He tallied a plus/minus of +30 to complement Vescovi. Phillips tallied five rebounds, blocked two shots and swiped a pair of steals to round out his night.

Jonas Aidoo and Olivier Nkamhoua were forces in the post for the Vols and shared the team lead in rebounds, each recording six. Aidoo guarded the rim with a fury, swatting away five Cowboy attempts and rejecting four shots in the first half alone, while Nkamhoua was efficient around the rim, dropping in 5-of-8 from the floor and totaling 11 points.

Tennessee’s defense came ready to go from the jump. The Vols forced 13 turnovers in the first half, five of which came on steals, and used their height advantage to block six Cowboy shots, equal to the total of made Cowboy baskets in the half, while limiting McNeese State to just 14 points in the first 20 minutes. That first-half total marked the third-fewest points allowed by the Vols in the Rick Barnes era. McNeese’s total of 40 points for the game, stood as the third time in the Barnes era a Tennessee opponent was limited to 40 points or fewer.

On the offensive end in the first half, every Vol who checked into the game scored a point, and Vescovi provided the offensive momentum, draining a pair of 3-pointers. Tennessee’s defensive success was met by equal amounts of discipline, as the Big Orange committed just three fouls in the period, conceding just two free-throw attempts. At the end of the first half, Tennessee held a 30-14 lead.

Tennessee, as it has for much of the season, turned up the heat coming out of the break. The Vols opened the second half on a 10-0 run and steadily increased that margin throughout the half, topping out at a 37-point lead and concluding with a 36-point margin of victory. The Vols only surrendered five turnovers in the second half and made 8-of-17 3-point tries while shooting at a 50 percent clip from the field in the period.

UP NEXT: Tennessee continues its three-game homestand, hosting Alcorn State on Sunday, Dec. 4, at 7 p.m. ET at Thompson-Boling Arena. Tickets are on sale at AllVols.com, and the contest will be broadcast on SEC Network+.

CONSIDER THE FLOOR FED: Tennessee extended its home win streak to 20 games with Wednesday’s victory—a streak that dates to March 7, 2021. The Vols’ current home win streak is tied for the sixth-longest in program history.

SLIM PICKINS : Tennessee has now held its opponent under the 1.000 points per possession mark in six of seven games this season, going undefeated when doing so.

The Vols held McNeese to .606 ppp on Wednesday—the fewest points per possession that Tennessee has allowed in a game this season.

NO EASY BUCKETS: For the fifth time this season, Tennessee held its opponent below 33 percent shooting from the field for the game, as McNeese finished the night shooting 28.6 percent (16-for-56).

JONAS PROTECTING THE RIM: Jonas Aidoo’s five blocked shots during Wednesday’s win are tied for the second-most in a single game in program history.

His five blocks marked the most by a Vol in a game since John Fulkerson’s five last season against Texas Tech on Dec. 7, 2021.