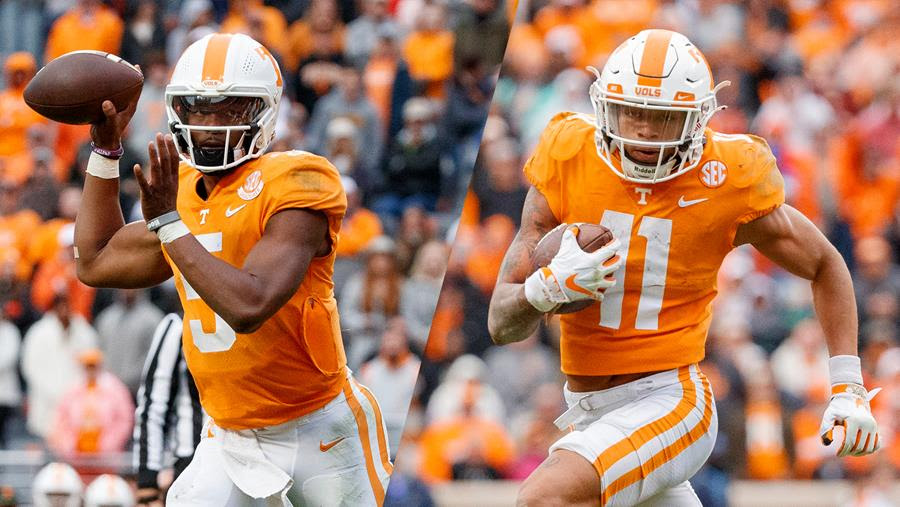 Presented by the Maxwell Football Club, the Maxwell Award annually recognizes the best player in college football. Hooker is up for one of the nation’s top honors alongside Ohio State QB C.J. Stroud and Southern Cal signal caller Caleb Williams, and he is Tennessee’s first finalist for the Maxwell Award since College and Pro Football Hall of Fame quarterback Peyton Manning won it in 1997.

A sixth-year senior and captain of the nation’s No. 1 offense, Hooker led the Vols to their first 10-win regular season in nearly two decades and displayed a confident resilience throughout the 2022 campaign. The Greensboro, North Carolina, native produced 3,565 yards of total offense, completing 229-of-329 passes (69.6 percent) for 3,135 yards with 27 touchdowns and two interceptions while rushing 104 times for 430 yards and five scores on the ground.

Hooker’s 175.51 passer efficiency rating ranks second in the Power Five and was achieved against a schedule ranked the seventh-toughest in the nation by ESPN’s Football Power Index (FPI). He claimed five wins over opponents ranked in the AP Top 25 at the time of meeting, combining for 1,817 yards of total offense and 16 touchdowns in those games. Hooker touts two victories over current top-11 opponents as the Vols took down LSU, 40-17, in Baton Rouge and defeated Alabama at home, 52-49, in back-to-back weeks.

The 24-year-old leads the nation with 9.53 yards per pass attempt while also ranking atop the Southeastern Conference in completion percentage, passing efficiency and total offense (324.1 yards per game). Hooker’s two interceptions are the fewest of the 24 FBS QBs who have thrown 25 or more touchdowns this season, and his 27:2 touchdown-to-interception ratio leads the Power Five.

Hooker has garnered a wealth of national attention this fall, being named a finalist for the Johnny Unitas Golden Arm Award and a semifinalist for the Walter Camp Player of the Year, Davey O’Brien Award and Jason Witten Man of the Year. A first team midseason All-American by multiple outlets, he has been named SEC Offensive Player of the Week three times this year and received national player of the week acclaim from the Davey O’Brien Foundation and Maxwell Football Club for his efforts against Alabama and Florida, respectively.

Hyatt put together a remarkable regular season in his third year on Rocky Top and is widely regarded as one of the nation’s most explosive playmakers. His school-record 15 receiving touchdowns lead the FBS, while his 1,267 receiving yards and 105.6 yards per game are tops in the Power Five. Long plays from scrimmage have become second nature for Hyatt as he leads the country in plays of 30-plus yards (15), 40-plus yards (11), 50-plus yards (7) and 60-plus yards (5) this season.

The Irmo, South Carolina, product has recorded five games with multiple touchdowns catches this fall, which ties for first in the FBS and leads the Power Five outright. Against teams currently in the AP Top 25, Hyatt sits atop the country with seven touchdowns while ranking eighth nationally with 398 yards across four contests against current ranked foes.

With three catches for 86 yards in the regular season finale at Vanderbilt, Hyatt is 31 yards shy of Marcus Nash’s program record for receiving yards in a single season. His SEC-leading 67 receptions this year are tied for the seventh-most in program annals and the most by a Vol since Justin Hunter had 73 catches in 2012.

Hyatt has also reeled in national recognition this fall, being tabbed a semifinalist for the Maxwell Award and Walter Camp Player of the Year and a midseason All-American by ESPN, the Associated Press and The Athletic.

The Volunteer tandem combined for a historic performance in one of Tennessee’s most memorable victories as the Vols took down then-No. 3 Alabama in a thrilling, 52-49 win on Oct. 15. Hooker passed for a career-high 385 yards and five touchdowns, finding No. 11 in Orange on all five passing scores. Hyatt’s five touchdown receptions tied the SEC single-game record, and he finished the contest with six catches for 207 yards to register the 10th 200-yard receiving performance in Tennessee history. With the game tied at 49 with 15 seconds left in the fourth quarter, Hooker heroically connected on passes of 18 yards and 27 yards to set up a 40-yard field goal try, and the rest is history.

The 2022 Maxwell Award and Biletnikoff Award winners will be unveiled as part of the 2022 Home Depot College Football Awards Show, broadcasted live on ESPN on Dec. 8, 2022 at 7 p.m. ET.