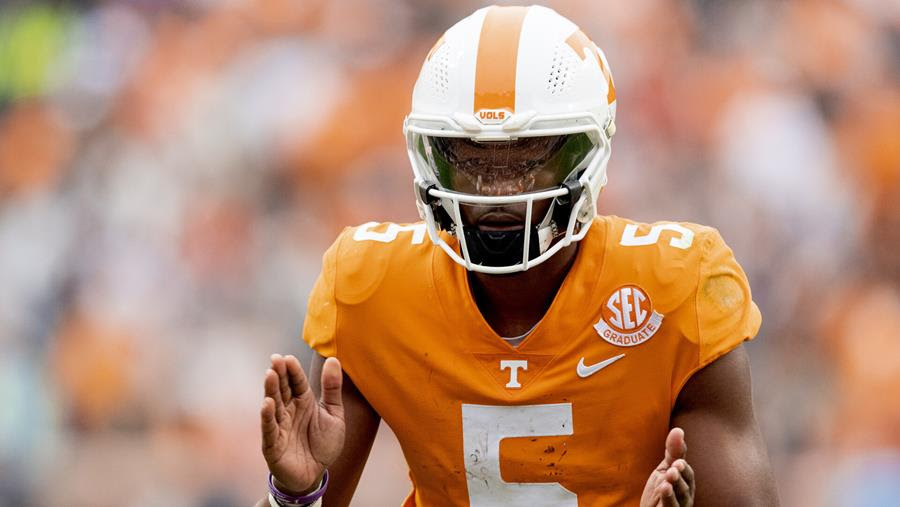 NEW HAVEN, Conn. – Following an unforgettable final season on Rocky Top, Tennessee quarterback Hendon Hooker added to his impressive list of accolades on Wednesday when he was named one of five finalists for the Walter Camp Football Foundation 2022 Player of the Year Award, which is presented annually to the nation’s most outstanding college football player.

A sixth-year senior and captain of the nation’s No. 1 offense, Hooker led the No. 7 Vols to their first 10-win regular season since 2003 and the program’s first-ever No. 1 ranking by the College Football Playoff committee when the rankings debuted on Nov. 1. The Greensboro, North Carolina, native produced 3,565 yards of total offense, completing 229-of-329 passes (69.6 percent) for 3,135 yards with 27 touchdowns and just two interceptions while rushing 104 times for 430 yards and five scores on the ground.

Hooker’s 175.51 passer efficiency rating ranks second in the Power Five and was achieved against a schedule ranked the seventh toughest in the nation by ESPN’s Football Power Index (FPI). He claimed five wins over opponents ranked in the AP Top 25 at the time of meeting, combining for 1,817 yards of total offense and 16 touchdowns in those games. Hooker touts two victories over current top-14 opponents as the Vols took down LSU, 40-17, in Baton Rouge and defeated Alabama at home, 52-49, in back-to-back weeks.

The 24-year-old leads the nation with 9.53 yards per pass attempt while also ranking atop the Southeastern Conference in completion percentage, passing efficiency and total offense (324.1 yards per game). Hooker’s two interceptions are the fewest of the 24 FBS QBs who have thrown 25 or more touchdowns this season, and his 27:2 touchdown-to-interception ratio leads the Power Five.

Wednesday’s recognition adds to a long list of honors for Hooker, who has garnered a wealth of national attention this fall, being named a finalist for the Maxwell Award and the Johnny Unitas Golden Arm Award, as well as a semifinalist for the Davey O’Brien Award and Jason Witten Man of the Year.

A first team midseason All-American by multiple outlets, the veteran signal caller has been named SEC Offensive Player of the Week three times this year and received national player of the week acclaim from the Davey O’Brien Foundation and Maxwell Football Club for his efforts against Alabama and Florida, respectively.

The 2022 Walter Camp Player of the Year recipient, who is voted on by the 131 FBS head coaches and sports information directors, will be announced on Thursday, Dec. 8 during ESPN’s The Home Depot College Football Awards Show. The other four finalists are TCU quarterback Max Duggan, Ohio State quarterback C.J. Stroud, USC quarterback Caleb Williams and Michigan running back Blake Corum.