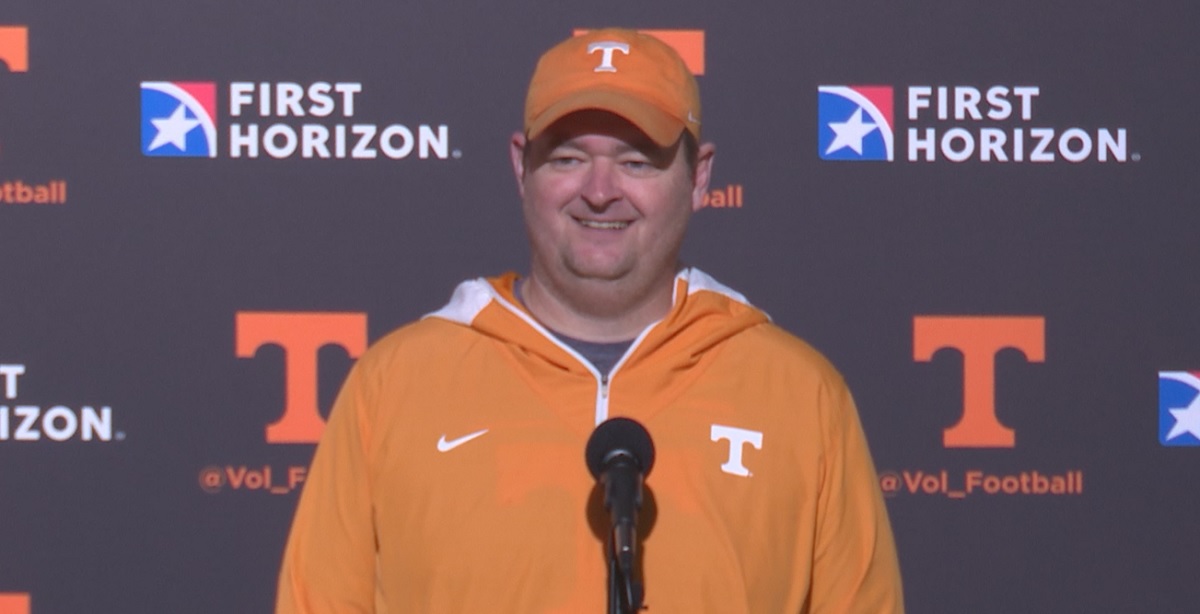 “Good afternoon, everybody.  So happy to have the opportunity to be here with you guys today.  We are so excited and happy about the invitation to the Capitol One Orange Bowl.  I’m really proud of our program, the steps that we’ve taken in the last two years.  Extremely proud of our staff and our players.  This season was a really unique one.  So proud of the accomplishments that we had on the football field.  It’s truly a team that’s connected, that competes extremely hard. We’re really proud of the steps that we’re making.  Really excited to have the opportunity to compete in the Orange Bowl here later this month.  I know, having played in it and coached in it two previous times, this bowl game is as good as it gets.  It’s a very unique and special opportunity for our football program, and one that we couldn’t be more excited to partake in.  I know that our fans, Vol Nation, are going to show up in droves.  They’re excited about this opportunity to compete. What a prestigious game.  Very honored to be a part of it.”

Q. Curious how much you’ve been able to follow Clemson from afar over the years, how you perceive Coach Swinney’s program, if you’ve seen them at all this season, how you compare their defense to Alabama’s defense?

“Yeah, in recent years obviously I’ve had an opportunity to see them sporadically throughout the season, but see them.  It’s a tradition-rich program. They’ve had a ton of success, not just in past seasons but in this season, too.  Obviously finishing it out with an ACC championship.  We have great respect for the quality of opponent.  Coach Swinney has done a fantastic job with that program since he’s taken over.  Obviously you look at what they’ve done defensively year in and year out, one of the top in the country.  Haven’t had a chance to follow up and watch in detail, just the personnel or the scheme.  Can’t dive too much into that. Obviously we’ll do that here in the coming days and certainly over the next week.  But offensively they’re historically a really good program, too.  Certainly last night were very explosive and created a bunch of big plays.  Great opponent, one that we’re excited about having the opportunity to go compete with here at the end of the month.”

Q. Could you talk to me about coming back to Florida. You had a very successful stint at UCF, now you’ll be back in Florida.  You know a lot about the state.  You have Joe Milton, who is from Florida.  He’ll be leading you against Clemson.

“Yeah, Joe is certainly going to be excited about having an opportunity to go play in an area that he certainly is familiar with, but so many friends and family, coaches and mentors that have been a part of his life will have an opportunity to come see him play in the football game.

Certainly for me, having familiarity with the state of Florida, having been down there, a lot of our staff as well, having recruited down there.  It’s a place that we certainly know well.  But not just through my experience down there as a coach, also just having played in this bowl game as a player, having coached in it two previous times as a coach, as well.  This is a great week leading up to the kickoff.  The bowl committee does an unbelievable job of taking care of the athletes and the staff.  It’s absolutely first class.  The football game itself is always one that is highly competitive and a special environment.”

Q. What’s the plan for kind of filling the gap of Alex Golesh?  How will you fill his shoes?  Who is the accountable coach that can recruit over this next month with Alex gone?

“Yeah, certainly losing Alex is something that we’re excited about.  I think it speaks to the growth inside of our program.  When I say that, just that the success that we’re having on the field, the style of play, the culture that we have inside of our building, for him to have an opportunity to go run his own program is one that I and the staff are excited for him to have that opportunity.  In the coming days we’ll understand how we want to fill that out on the recruiting trail, then as we get into game preparation as well.  Excited for him.  Again, I think it speaks so well to what our players and staff has done in a short amount of time here at Tennessee.”

Q. You talked about your past experience in this game, won a national title here in 2000.  Talk about how what you’re going to say to the players who may not have experienced this big bowl game atmosphere. How are you going to tell them about what they’re going to see here?

“Yeah, at the end of the day the game is the most important thing.  It’s the most memorable thing of all the week of festivities.  I think it’s important that you enjoy the buildup and opportunity to see a new place, see a new culture, enjoy the festivities of the week.  At the end of the day the most important thing is the game.  When it’s time to lock into your game preparation, your practice, you got to be completely invested in those moments.  At the end of the day, at the end of the week, man, you’re going to get an opportunity to play in a very special game.  This is an historic, iconic game.  A lot of these guys have grown up in an era of watching the importance of this football game.  I know I grew up in that as well.  This is a special opportunity.  You’re going to have the entire country watching this football game when this is slotted here on TV.  It’s a special opportunity, a special moment, and a memory that you’ll have forever.”

Q. Because you have coached in this game twice since you won the national championship, is it only natural to have some pangs of nostalgia when you come to this event?

“Yeah, there will be things that will spark memories from my two stints as a coach being back in Miami.  But certainly as a player, too, absolutely will bring back a lot of great memories.  Really excited about having an opportunity to lead a program in this football game.  This game is extremely special to me.  A lot of great memories.  Really looking forward to that opportunity.  Already have teammates that will be able to come to the ballgame, guys that shared the field with me.  Really looking forward to that opportunity.”

Q. Obviously there’s a lot of kids that opt out of bowl games these days.  With this being such a big game, do you expect most of your guys to be there?

“Yeah, I certainly expect most of our guys to be there.  There’s guys that are still gaining information, guys that were nicked up on the back half of the season, that got to see where they get to here over the coming days and make a smart, educated decision for them and their future.  This is a special football game.  This is important to our program.  It’s important to our players inside of the locker room.  Certainly I believe we’ll have a majority if not a full roster when we get down there for it.”

Q. You obviously know the American Athletic Conference, what it takes to succeed.  Why do you think Alex could succeed at that level as a head coach at this moment?

“He’s smart.  He’s competitive. Offensively what he came in and learned while we were at UCF, then transitioned up here to Tennessee.  He has a great ability to communicate and relate to student-athletes. He’s relentless as a recruiter. There’s no doubt in my mind he’s going to do a great job of leading that program.”

Q. Speaking of your playing days, you were actually a Heisman finalist at that point.  Hendon Hooker may have a chance to go through the same process.  Has he leaned out to you for that process, from your experience?

“Yeah, unfortunately he doesn’t have control of that at this point.  Hendon certainly deserves to be at that ceremony.  He certainly is one of the best players in college football.  The growth of our program is a direct correlation to what he’s done, what he’s invested, how he’s helped build the culture inside of our locker room.  Dynamic play-maker that has played his best in the biggest moments.  Fierce competitor that makes a ton of plays.  I certainly hope that he has that opportunity.”