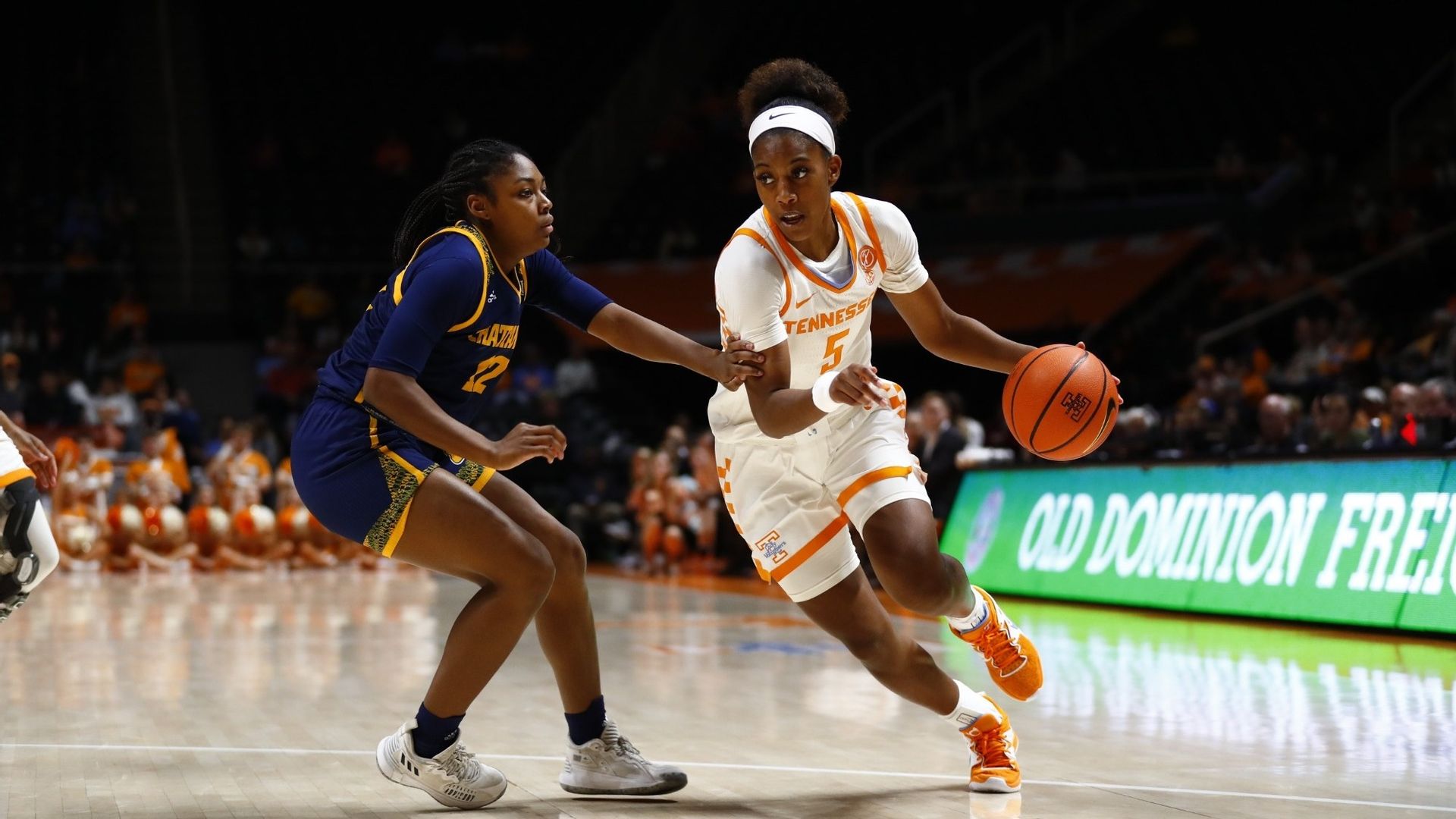 KNOXVILLE, Tenn. – The Tennessee Lady Vols got contributions throughout the lineup Tuesday night en route to a dominant 69-39 victory over Chattanooga at Thompson-Boling Arena.

After posting perhaps its best effort of the season in a three-point loss to No. 9 Virginia Tech on Sunday, UT took more steps forward in the midweek contest vs. a long-time in-state rival. The Big Orange (5-5) dominated in nearly every facet of the game, capitalizing on opportunities when presented with them. The Lady Vols, despite playing without seniors Tamari Key, Jasmine Franklin and Rickea Jackson, outscored Chattanooga (6-5) by an 18-0 count in fast-break points and turned 21 UTC turnovers into 19 points while surrendering only four.

ADVERTISINGOf the 12 players to take the floor for the Lady Vols, 11 scored and the wealth was spread throughout the squad. Senior guard Jordan Horston led all scorers in the game, dropping 14 points on 6-of-8 shooting and sinking both tries from beyond the arc. Horston also added two blocks and two steals in the contest.

On the glass, senior guard Jasmine Powell cleaned up the glass and secured six boards, all on the defensive end. She was followed closely by Jillian Hollingshead, who collected five rebounds go along with nine points.

The Lady Vol defense dominated throughout the game and held the Mocs to some long scoring droughts to push themselves to victory. For a span of 10:19 from the first quarter to the second, Chattanooga did not make a field goal. During that time, Tennessee scored 20 points of its own and made the run 28-4 before the Mocs hit two baskets.

Tennessee swatted away eight Mocs’ shots and picked off another seven. Sara Puckett and Hollingshead matched Horston’s total of two for the team lead while Karoline Striplin and Justine Pissott batted away a shot of their own.

The connectedness of each lineup on the court was on full display, as none of the 12 individuals who got on the court finished with a positive plus/minus, led by Puckett’s +21 and Hollingshead’s +19.

Tennessee dominated the Mocs on the defensive side in the first quarter. After Chattanooga connected on its first two field goals of the game, the Lady Vols put the clamps on, allowing just one make the rest of the period on nine tries. Further, the visitors were held without a made field goal over the last 7:08 of the quarter. Tennessee didn’t trade offense for defense in the period, either. The Lady Vols fired 50 percent from the field (8-of-16) with seven different individuals getting on the scoresheet. After the first 10 minutes of action, Tennessee led 19-8, marking the lowest opponent total in the first quarter this season.

The second frame was a near mirror image of the first. Tennessee won the quarter by 11 points, the same margin it did in the first, outscoring the Mocs 18-7. Seven Lady Vols scored a point in the period, the exact same number that scored in the first. In the second quarter, however, UT had a lot of success with its ball movement, assisting on all seven of its made baskets. Tennessee poked away four steals, after tallying that same number in the first frame in the block department. The Lady Vols went into the locker room with a 37-15 lead.

The score line was all even in the third frame of action. The Lady Vol offense was propelled by five points from Horston who sank a 3-pointer to open the second-half scoring, then capped the period by dribbling off a screen, then spotting up just outside the top of the key and knocking down the jumper. Suarez also contributed four points in the quarter, dropping in a pair of layups, including a nifty up-and-under reverse.

The fourth quarter rolled along with Tennessee continuing to build its lead, eventually building to the 30-point margin of victory that showed on the final scoreboard. Ten different Lady Vols got on the court in the final period and the Big Orange nearly doubled UTC on the scoreboard like it nearly did in the shooting percentage. Tennessee outscored Chattanooga 18-10 in the fourth, outshooting the Mocs 50 percent (7-of-14) to 28.6 percent (4-of-14).

UP NEXT: The Lady Vols will play their fifth straight home contest on Sunday, hosting Wright State in a 2 p.m. ET matchup that will be streamed on SECN+.  Tickets are still available at AllVols.com.

COLLEGIATE FIRST: Sophomore Karoline Striplin made her first career start against Chattanooga and immediately made an impact, scoring UT’s first points of the game and leading the team in scoring at the half with seven points. She finished with a 3-of-7 night from the field, including 1-of-2 shooting behind the arc, and tallied three rebounds, an assist, steal and block in 20 minutes.

LOCKDOWN DEFENSE: Tennessee limited Chattanooga to just eight first-quarter points, the fewest points scored by any Lady Vol opponent in an opening period this season. It was the first time the Mocs had been held below 10 points in a first quarter and just the third time they’d posted single-digit scoring in any quarter during the 2022 campaign.

DEFENSE CREATES OFFENSE: The Lady Vols forced 21 turnovers against UTC and turned those into 19 points. That was the second-highest number of turnovers UT has forced this season, only trailing Colorado’s 25 turnovers.

BALANCED ATTACK: Eleven of UT’s 12 active players made it onto the scoresheet against the Mocs, with seven Lady Vols tallying five or more points and nine grabbing three or more rebounds.

MONEY FROM THE STRIPE: Junior Tess Darby has hit a pair of free throws in each of the last two games, keeping her career total a perfect 100 percent on 14-of-14 from the free-throw line.