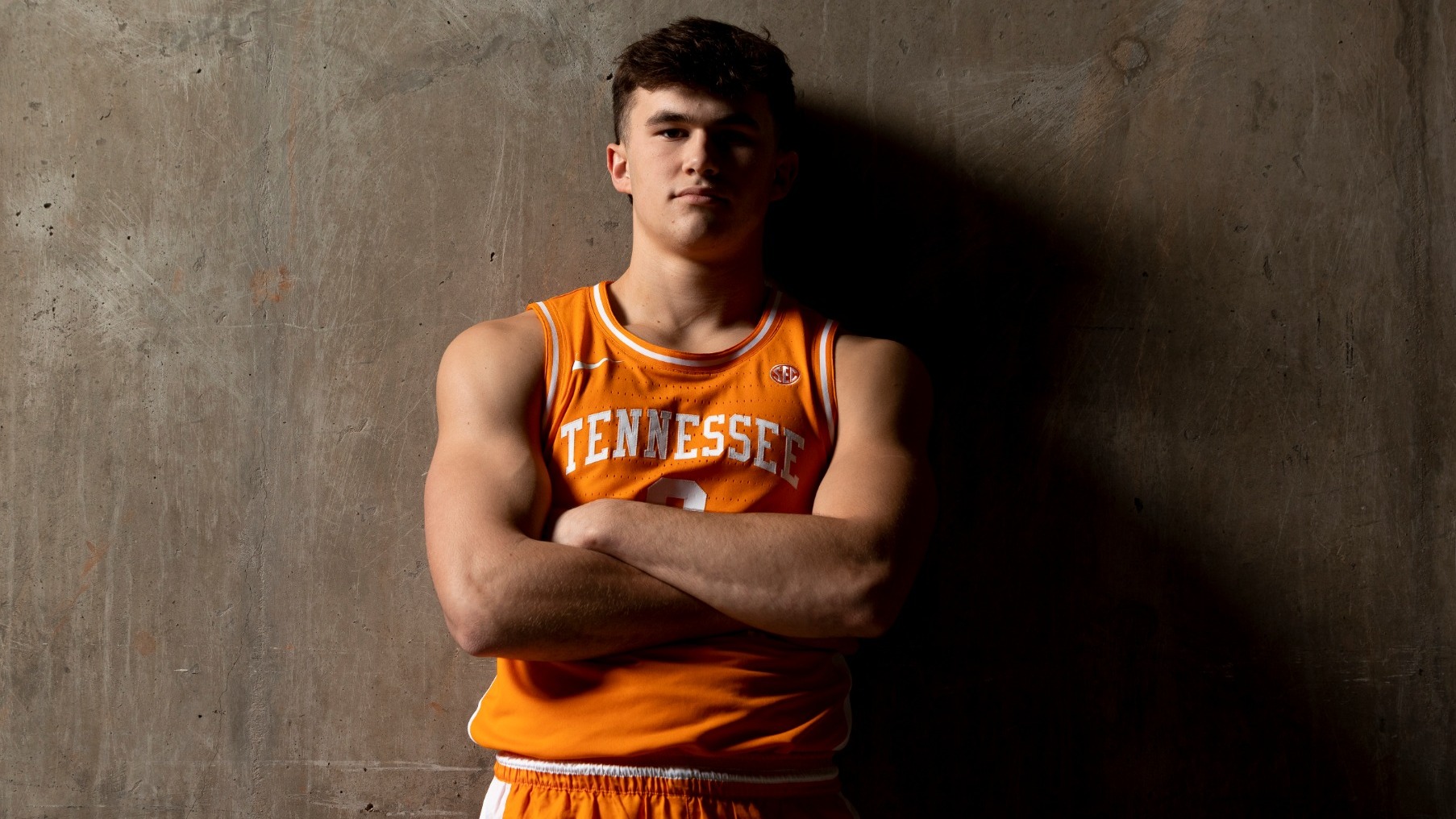 Fans can catch Wednesday’s game on SEC Network and online or on any mobile device through WatchESPN. WatchESPN can be accessed through the ESPN App, or online at espn.com/watch. Tom Hart (play-by-play) and Dameon Fischbach (analyst) will have the call.

Wednesday marks the sixth all-time meeting between Tennessee and Eastern Kentucky and first since 2018, with UT holding a current 5-0 advantage. The Vols are 19-1 all-time against current members of the ASUN Conference.

Following Wednesday’s game, Tennessee heads to New York City for the Basketball Hall of Fame Invitational. The Vols are set to take on No. 13 Maryland Sunday at 4:30 p.m. in the Barclays Center, home of the NBA’s Brooklyn Nets. The game will be televised on FOX Sports 1.

TICKETS AND PARKING
Tickets and parking passes to all Tennessee Athletics events, including men’s basketball, are now digital and can be accessed through a mobile device to improve security and reduce the risk of ticket fraud as well as make the process more convenient for fans.

Fans will gain admission into Thompson-Boling Arena via a unique QR code which will be scanned directly from a mobile device. For quick and easy entry into Tennessee Athletics venues, fans are encouraged to download the Tennessee Athletics app from the App Store (iPhone) and Google Play (Android).

Your mobile device is the ticket on gameday. All valid digital tickets will display a moving barcode or a hold near reader (tap-and-go) icon. PLEASE NOTE: SCREENSHOTS OF TICKETS WILL NOT SCAN AT THE GATE AND WILL NOT ALLOW ENTRY!

Printed PDF tickets will no longer be issued or accepted for entry at any Tennessee Athletics venue.

A complete step-by-step guide on how to best access and use your digital tickets and parking passes, including diagrams and FAQ is available here.

THE SERIES
• Tennessee leads its all-time series with Eastern Kentucky, 5-0.
• Three meetings have taken place in Knoxville (1984, 2005 and 2018). The Vols also have defeated EKU in Richmond (1912) and Murfreesboro (1979).
• The Vols are 19-1 all-time against current members of the ASUN Conference. When these programs met in November of 2018, EKU was a member of the Ohio Valley Conference.
• The Lady Vols basketball team defeated Eastern Kentucky, 105-71, at Thompson-Boling Arena on Nov. 27.
• A Vols victory Wednesday would extend UT’s home win streak to 22 games overall and to 19 games against non-conference foes (dating to a loss to Wisconsin on Dec. 28, 2019).

SCOUTING REPORT
• Tennessee debuted at No. 4 in the season’s first NET rankings.
• The Volunteers have never trailed in each of their last three games.
• Tennessee ranks among the national top 10 in seven statistical categories: field-goal percentage defense (.345, 3rd), steals per game (11.9, 3rd), scoring defense (51.5 ppg, 4th), 3-point FG defense (.226, 4th), scoring margin (+23.5 ppg, 7th), offensive rebounds per game (14.4 orpg, 9th) and turnover margin (+6.1, 10th).
• Just as the Vols saw the return of preseason All-SEC wing Josiah-Jordan James after missing four games due to left knee soreness, fellow preseason All-SEC senior Santiago Vescovi was sidelined with a left (shooting) shoulder sprain. Vescovi remains day-to-day.
• The Volunteers own the best adjusted defensive efficiency in the country, allowing only 83.2 points per 100 possessions.
• Six times this season, the Vols have held their opponents to 50 points or less. Tennessee held its foes to 50 or less five times all of last season and have now done it 26 times during the Barnes era.
• Tennessee has yet to trail at the half this season and is outscoring its opponents 34.4 ppg to 23.3 ppg (+11.1 ppg) in first-half action.
• True freshman Julian Phillips has attempted more free throws this season (51) than every player in the SEC except Mississippi State’s Tolu Smith (54) and Texas A&M’s Tyrece Radford (52). Phillips’ .804 free-throw percentage is fifth-best in the league.
• The Vols boast an average home attendance of 16,722 this season. That average ranks fifth nationally behind only Kentucky (19,301), Arkansas (19,200), North Carolina (18,695) and Syracuse (16,788).

ABOUT EASTERN KENTUCKY
• Eastern Kentucky (4-4) enters Wednesday’s game in Knoxville coming off a 97-80 loss at James Madison on Friday.
• The Colonels have faced one power conference opponent this season—falling 87-69 at Cincinnati on Nov. 13.
• EKU head coach A.W. Hamilton is in his fifth season at the helm of the program, having posted a 68-64 record during his time in Richmond.
• Eastern Kentucky is in its second season as a member of the ASUN after spending 73 years in the Ohio Valley Conference.
• The Colonels are ranked No. 268 in KenPom—ranking No. 275 in adjusted offensive efficiency and No. 262 in adjusted defensive efficiency.
• Eastern Kentucky’s leading scorer, junior forward Devontae Blanton, ranks third in the ASUN and 72nd amongst all Division I players with a 17.8 ppg scoring average. Blanton has scored in double figures during every game this season.
• Eastern Kentucky ranks 15th in the nation in 3-pointers made per game with 10.5. Nearly half of those 3-pointers (4.4 per game) come from Blanton and junior forward Michael Moreno, who are shooting 50.0 and 40.4 percent from 3-point range this season, respectively.
• Moreno, who is currently averaging 11.0 points and 6.0 rebounds per game, was Eastern Kentucky’s lone selection to the preseason ASUN all-conference team.
• The Colonels are 21st in the nation in bench points, averaging 32.6 points off the bench per game. EKU also leads the ASUN in steals with 9.8 per game.

LAST MEETING WITH EKU
•  No. 6 Tennessee’s starting five combined for 72 points, fueling the Volunteers to a 95-67 victory over the Eastern Kentucky Colonels on Nov. 28, 2018, at Thompson-Boling Arena.
•  Four Vols scored in double figures, headlined by a double-double from junior forward Grant Williams. The two-time SEC Player of the Year posted 21 points, 11 rebounds and five assists and was a perfect 9-for-9 from the free-throw line.
•  Senior Admiral Schofield poured in 20 points on 8-of-9 shooting from the field, while junior point guard Jordan Bone added 14 points and seven assists for the Big Orange. Sophomore wing Yves Pons posted a then-career-high 10 points in his first collegiate start to round out UT’s double-digit scorers.
•  EKU’s Nick Mayo paced all scorers with 23 points on the night while also leading the Colonels with nine boards. The senior forward went 10-for-10 from the charity stripe.
•  Tennessee pulled down a season-high 50 rebounds, including a season-best 18 boards on the offensive end. The Vols outscored the Colonels 48-20 in the paint, and UT had 25 points off of 20 EKU turnovers.
•  The contest marked the 500th game the Tennessee’s men’s basketball team has played inside Thompson-Boling Arena. The win brought the Vols’ all-time record in TBA to 371-129 (.742).

TWO SLEEPS TILL BROOKLYN
• Shortly after Wednesday’s clash with EKU, the Vols will depart Friday afternoon for New York City, where they face currently undefeated and 13th-ranked Maryland Sunday in the Hall of Fame Invitational at the Barclays Center.
• Tennessee and Maryland occupy the Nos. 4 and 6 spots in the NCAA’s NET rankings.
• Zakai Zeigler hails from Long Island, while Tobe Awaka grew up in Hyde Park.

TENNESSEE OPPONENTS FACING 40-MINUTE FIGHT FOR 50
• Only two of Tennessee’s seven opponents this season have managed to score more than 50 points.
• Tennessee leads all Division I teams with six games in which they’ve held their opponent to 50 or fewer.
• Even defending national champion Kansas topped out at an even 50 points when the Vols defeated the third-ranked Jayhawks in the Battle 4 Atlantis title game.

VOLS LEAD NATION IN ASSIST RATE
• Tennessee has assisted on 72.7 percent of its made baskets thus far. That assist rate is tops among all Division I teams.
• Zakai Zeigler and Santiago Vescovi lead the way with 28 (3.5 apg) and 24 (3.4 apg), respectively.

PHILLIPS FINDING HIS RHYTHM, STEADILY GAINING CONFIDENCE
• Tennessee senior Josiah-Jordan James in November of 2018 became the first McDonald’s All-American to sign with the Vols under head coach Rick Barnes. That kickstarted an annual streak of McDonald’s All-American signings for Tennessee that was recently extended to four straight years with the addition of freshman Julian Phillips, who has started every game.
• Gaining confidence with each passing week, Phillips is giving the Vols 11.8 points, 5.1 rebounds and 2.1 assists per game. His 51 free-throw attempts lead the team, and he is making them at an .804 clip.
• A stat sure to please Barnes: Phillips owns a 2.43 assist/turnover ratio.
• Phillips also has drawn a team-high four charges.
• Phillips is one of seven five-star prospects to sign with the Vols during the Barnes era. Three of the seven—James, Phillips and forward Jonas Aidoo—are on this year’s roster.