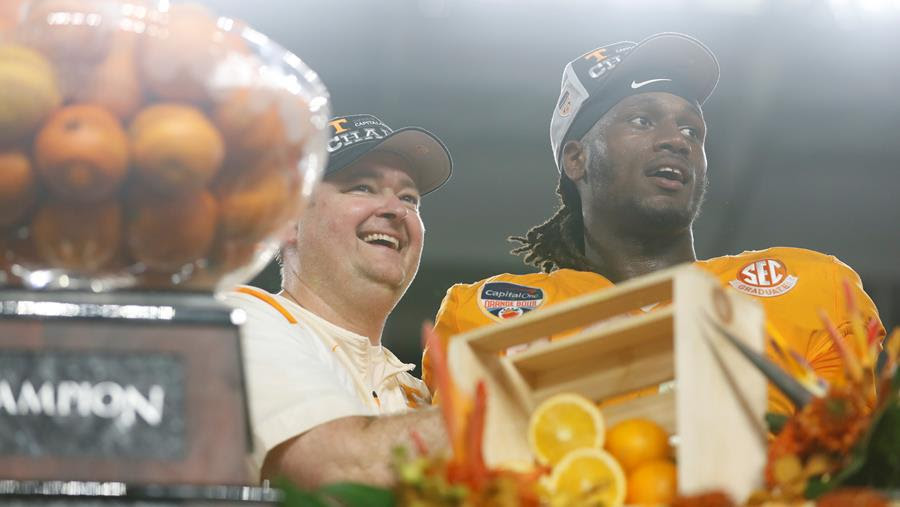 MIAMI GARDENS, Fla. — The sixth-ranked Tennessee Volunteers emphatically punctuated a memorable 2022 campaign on Friday night with a New Year’s Six bowl victory, taking down No. 7 Clemson 31-14 in the Capital One Orange Bowl at Hard Rock Stadium.

In his second year at the helm of Tennessee football, head coach Josh Heupel guided the Vols (11-2) to their ninth 11-win season in program history and first since 2001. Friday’s result marked Tennessee’s first victory in a “New Year’s Six” bowl game (2014-pres.) and first win in the Orange Bowl since defeating Oklahoma in 1939.

Playing 80 miles from his hometown of Pahokee, Florida, quarterback Joe Milton III shined under the bright lights in his fourth start for the Vols. The redshirt senior completed 19-of-28 passes for 251 yards and a career-high tying three touchdowns with no interceptions, and he was named the 2022 Capital One Orange Bowl Most Valuable Player.

Sophomore running back Jaylen Wright led the Vols in the ground game with a game-high 89 yards on 11 carries, while junior Jabari Small toted 13 rushes for 38 yards and his 13th touchdown of the season. The Volunteer receiving corps was paced by freshman slot receiver Squirrel White who cracked the century mark for the second time this season, finishing with a season-high nine catches for 108 yards and a touchdown.

Tennessee’s defense reigned supreme in the battle between top-10 squads, and the Vols were led by senior linebacker Aaron Beasley. The Franklin, Georgia, native feasted with a game-high 12 tackles, career-high four tackles for loss and two sacks along with one pass breakup. Redshirt senior linebacker Solon Page III ended his career with a career-best effort, logging 10 tackles to rank second on the team.

The UT secondary got the job done on the back end, with junior defensive backs Tamarion McDonald and Wesley Walker posting one interception each and Doneiko Slaughter logging a career-high three pass breakups.

Tennessee grabbed momentum early after forcing a turnover on downs in the first quarter, halting Clemson’s nine-play, 53-yard drive when redshirt junior cornerback Kamal Hadden and Page combined for a stop on a fake field goal rush. The duo stuffed holder Drew Swinney for a two-yard gain on fourth-and-4 to set up a scoring drive for the Big Orange.

Milton orchestrated an 11-play, 75-yard touchdown series off the turnover on downs, culminating with a 16-yard scoring strike to redshirt junior wideout Bru McCoy who made a strong, two-handed grab on contact in the back of the end zone. Redshirt senior Chase McGrath knocked through his 67th PAT of the year, breaking his own school record from last season to give the Vols a 7-0 edge with 5:17 left in the opening stanza.

The Tigers (11-3) had three chances at points early in the first half but were unable to capitalize after three consecutive missed field goals by senior placekicker B.T. Potter. His 55-yard attempt with 3:05 remaining in the first quarter fell harmlessly wide right and short of the goal post before a 49-yard try with 14:08 left in the second quarter was also pushed wide right. His third kick came from 42 yards and sailed just left of the goal posts, keeping Tennessee’s seven-point lead intact with 10:15 to go in the half.

Tennessee quickly doubled its lead after the third kicking miscue, using 1:12 of game clock for a five-play, 75-yard touchdown drive to go ahead by 14 with 9:03 left in the second period. Milton completed four-straight passes on the drive, including a 50-yard deep ball to White that set up junior running back Small’s two-yard scoring plunge.

Small improved his season total to 13 rushing touchdowns, moving into a tie for sixth in UT single-season history. His 13 scores on the ground are the most by a Vol since Montario Hardesty also had a baker’s dozen in 2009.

Potter got Clemson on the board with 5:11 left in the first half, hooking his fourth field goal try of the night from 31 yards just inside the left post. Neither side scored for the rest of the period, and the Vols headed to the halftime locker room with a 14-3 lead over the Tigers.

After receiving the kickoff out of halftime, the Tigers doubled their point total when Potter’s 40-yard field goal sailed between the uprights with 10:57 remaining in the third quarter. The kick capped a methodical, 10-play, 45-yard drive for Clemson to cut its deficit to eight points, 14-6.

Tennessee’s offense stalled on the next two drives before Clemson marched into Volunteer territory. The Big Orange defense held up once again when linebackers Beasley and Juwan Mitchell stopped Tiger running back Will Shipley on fourth-and-2 to force the game’s second turnover on downs with 1:27 left in the third.

The UT offense responded with another quick touchdown series, going 70 yards in four plays in 1:22 of game time. Wright broke off runs of nine, 42 and five yards before Milton’s second touchdown toss found White in the middle of the checkerboard-painted endzone. The 14-yard throw vaulted Tennessee’s lead to 21-6 with five seconds remaining in the third.

Clemson quickly narrowed the deficit with its first touchdown of the night when quarterback Cade Klubnik ran four yards into the endzone on a read option—capping a 12-play, 71-yard drive for the Tigers. Shipley broke through the middle on the two-point conversion to make it a 21-14 Tennessee lead with 10:01 left in regulation.

Milton put the game on ice midway through the fourth quarter on the ensuing drive, connecting with Keyton on a wide open deep ball down the right sideline for a 46-yard touchdown that put Tennessee ahead by two touchdowns. McGrath’s program record 70th made PAT doubled up the Vols over the Tigers, 28-14, with 8:34 left in the contest.

Tennessee’s attacking, staggering defense posted the game’s first takeaway on Clemson’s next drive to all but seal the win as junior defensive back Tamarion McDonald leaped in the air and nabbed his third career interception. McGrath put the finishing touches on the victory, knocking his final career field goal attempt from 32 yards between the uprights for the final score, 31-14.

Clemson threatened a late touchdown when Klubnik heaved his 54th pass attempt into the endzone, but redshirt junior Wesley Walker grabbed his first career interception to leave no doubt. Three Milton kneel downs ended the game and the Vols hoisted the Orange Bowl trophy for the first time in 83 years.