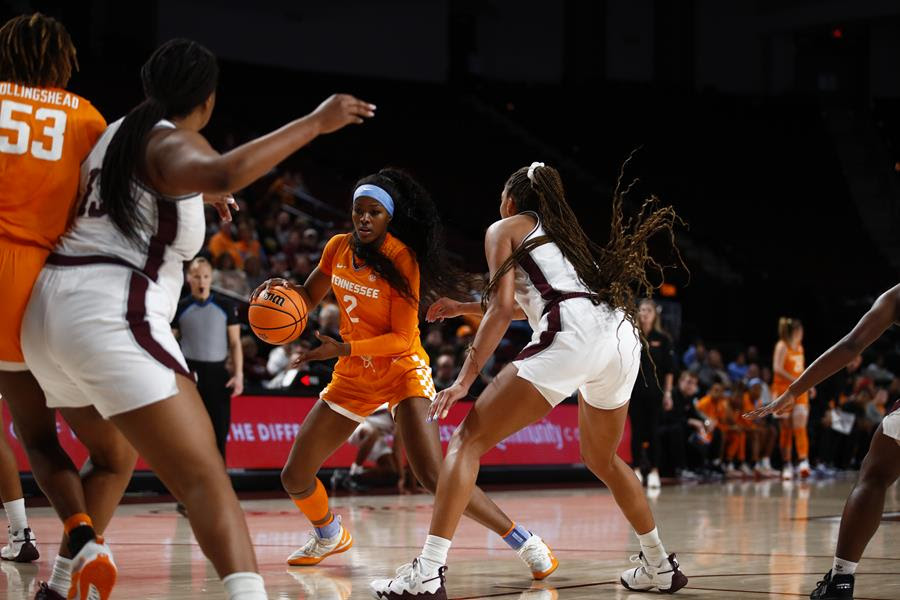 COLLEGE STATION, Texas – Tennessee took a gritty 62-50 victory on the road at Texas A&M on Thursday night to claim its first win in Reed Arena since 2014 and stay unbeaten in Southeastern Conference play.

Both teams struggled offensively in the first frame, with Tennessee shooting 20 percent from the floor and TAMU managing a field goal percentage of just under eight percent for the quarter. Horston scored UT’s first basket on a steal and score a minute into play before Patty tied it up from the free-throw line 15 seconds later. The score would stay 2-2 for nearly two minutes until Bowles hit a long range three. Darby ended UT’s scoring slump with a baseline trey at the 5:42 mark, tying the game at 5-all through the media timeout. Tennessee took the lead when Jackson hit the second of a pair of free throws with three minutes to go in the first and went up 8-5 a minute and 15 seconds later when she added a 10-foot jumper. Mya Petticord cut Tennessee’s lead down to one with a pair of free throws in the closing minute, sending the game into the second quarter with the Lady Vols leading 8-7.

The teams’ offensive woes continued into the second period with UT being held to a single field goal and the Aggies’ only points coming from the free-throw line until nearly two and a half minutes in, when Jackson scored on back-to-back possessions to put the Lady Vols up 14-10 with 7:01 left in the half. The teams traded 3-pointers before Jackson rattled off six straight points while UT limited Texas A&M to two, taking an eight-point lead at the 3:34 mark. TAMU scored one more basket before the half, making the halftime score at 23-17.

Patty hit a three to kick off the second half, pulling the Aggies within three points. Tennessee responded with a 10-3 run capped off by back-to-back fast-break layups by Jackson to give the Lady Vols a 33-23 lead at the 5:30 mark. Petticord drained a three coming out of a timeout to cut the deficit back to single digits, but Jillian Hollingshead hit a contested jumper falling away from the basket, and Darby followed it up with a layup to put the Lady Vols up by 11 with 3:23 to go in the third. UT would maintain that lead until TAMU hit a layup at the buzzer to send the game into the final period with the Big Orange on top 41-32.

Karoline Striplin scored two straight possessions to open the fourth, giving the Lady Vols a 13-point cushion with nine minutes left in the game. A jumper by Kay Kay Green pulled Texas A&M within 11, and the game became a back-and-forth affair with Tennessee maintaining a double-digit lead. A&M, however, cut it back to 11 points on three occasions before a 7-0 Aggie run beginning at the 3:43 mark pulled them within six at 55-49 with 2:27 to play. Tennessee responded with an old-fashioned 3-point play by Horston and back-to-back layups by Jasmine Franklin and Jackson to stretch its lead to 13 with 48 seconds to play. The Aggies hit a single free throw in the closing seconds, and UT ran out the clock to take a 62-50 victory on the road.

UP NEXT: The Lady Vols will return home to host Georgia on Sunday in a 1 p.m. ET matinee that will be broadcast on SEC Network.

SNIPING AND SWIPING: Darby knocked down two treys against TAMU, marking the 11th game this season in which she’s hit multiple treys. She also finished the game with four steals, tying her career high set in the previous game at Vanderbilt. She now has 16 steals on the season with half of those coming over the last two contests.

RICKEA IN CONFERENCE: Rickea Jackson led Tennessee in scoring at Texas A&M with 22 points on the day. She has now finished with 20 or more points in four of five SEC games and is averaging 22.6 points against conference foes.

TAKING ADVANTAGE IN THE PAINT: Tennessee got 44 of its 62 points in the paint, outscoring the Aggies by 32 there. UT has come out on top in paint production in 17 of 19 contests.