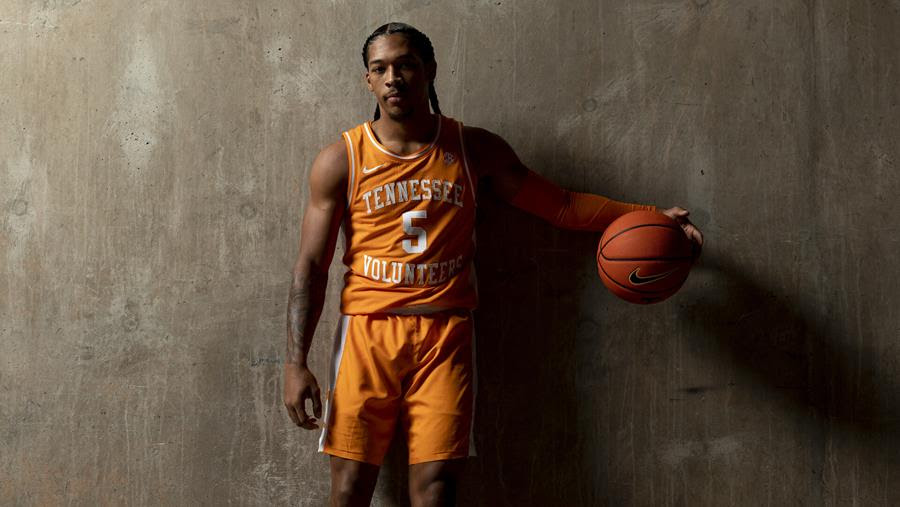 KNOXVILLE, Tenn. – The fifth-ranked Tennessee men’s basketball team is back home for a clash with rival Kentucky this weekend, set to take on the Wildcats on Saturday at 12 p.m. ET.

Fans can catch Saturday’s game on ESPN and online or on any mobile device through WatchESPN. WatchESPN can be accessed through the ESPN App, or online at espn.com/watch. Dan Shulman (play-by-play), Jay Bilas (analyst) and Holly Rowe (reporter) will have the call.

Tennessee (14-2, 4-0 SEC) notched its fifth straight win—and 25th straight inside Thompson-Boling Arena—Tuesday against Vanderbilt, pulling away in the second half for a 77-68 victory over the Commodores. Santiago Vescovi and Julian Phillips tied for the team lead with 15 points apiece, while Zakai Zeigler had seven points and nine assists.

The Vols’ 25 straight home wins now stand as the third-longest home win streak in the nation.

Tennessee is also riding an impressive streak against SEC opponents. Since last season’s loss to Kentucky at Rupp Arena on Jan. 15, 2022, Tennessee has played 20 games against SEC opponents—posting a 19-1 record in those contests. That stretch includes two wins over the Wildcats, one in Knoxville and one in Tampa during the SEC Tournament.

Following Saturday’s rivalry matchup, Tennessee hits the road twice next week—first at Mississippi State on Tuesday. Tip off is set for 7 p.m. ET on ESPN2.

THE SERIES
• Tennessee trails the all-time series with Kentucky, 158-77, dating to 1910.
• The Wildcats have a 54-52 edge when the series is played in Knoxville, but Tennessee has won five of the last seven meetings at Thompson-Boling Arena.
• The Vols have won eight of the last 13 meetings, including two of three last season.
• Since last season’s 107-79 loss at Rupp Arena on Jan. 15, Tennessee has played 20 games against SEC opponents—posting a 19-1 record in those contests.
• A win Saturday would give the Volunteers three straight over the Wildcats. In this series, neither team has authored a win streak longer than two games since 2013.
• Vols legend Chris Lofton, a native of Maysville, Kentucky, will have his Tennessee jersey retired at halftime of Saturday’s game.
• In three games vs. UK last season, Santiago Vescovi averaged 15.7 points and 4.3 rebounds while shooting .471 from long range.

SCOUTING REPORT
• The Vols occupy the No. 2 spot in the NCAA’s NET ratings.
• Tennessee ranks among the top five nationally in six different statistical categories.
• These Vols have won eight games by 30 or more points.
• While UT’s defense gets the headlines, during SEC play, the Vols lead the league in both assists (20.0 apg) and field-goal percentage (.529).
• UT owns a +22.5 scoring margin in SEC games. That’s complemented by a +14.5 rebound margin.
• Zakai Zeigler is averaging a league-best 7.5 assists during SEC play.
• Santiago Vescovi is averaging 16.5 points over UT’s last five games, shooting .604 from the field and .567 from 3-point range.
• Olivier Nkamhoua leads the SEC in field-goal percentage during league play, shooting .700.
• Tennessee is riding a 25-game home win streak at Thompson-Boling Arena. That includes 12 straight triumphs over SEC opponents.
• Tennessee has won 24 of its last 30 games against SEC opponents. That’s an .800 win percentage dating to Feb. 24, 2021.

THE NATION’S BEST DEFENSE
• For the seventh straight week, the Volunteers own the best adjusted defensive efficiency in the country per KenPom, allowing only 81.8 points per 100 possessions.
• Tennessee owns the best overall field-goal percentage defense (.335) and 3-point defense in Division I (.209).
• In 16 games, Tennessee opponents have managed to make only 76 3-pointers—just 4.8 per game.
• Nine times this season, the Vols have held their opponents to 50 points or less. Tennessee has now done that 29 times during the Barnes era (2015-present).
• Only two opposing players have scored 20 or more points against the Vols this season.
• Tennessee trailed at the break only twice this season and is outscoring its opponents 36.4 ppg to 24.8 ppg in first-half action (+11.6 ppg).

ABOUT KENTUCKY
• Kentucky (10-6, 1-3 SEC) enters Saturday’s game having lost two straight—falling at Alabama last Saturday and dropping a home contest to South Carolina on Tuesday.
• The Wildcats are currently ranked No. 63 in the NET rankings and have dropped all five of their Quadrant I games—on the road at Gonzaga, Missouri and Alabama, and on neutral courts against Michigan State and UCLA.
• Kentucky is 0-3 in true road games this season—1-5 in total in games outside of Rupp Arena.
• Reigning unanimous National Player of the Year Oscar Tshiebwe has once again been Kentucky’s leader from a statistical standpoint this season, leading the Wildcats in scoring (15.8 ppg) and rebounding (13.2 rpg). Tshiebwe has recorded a double-double in nine of Kentucky’s 16 games this season.
• Tshiebwe’s 13.2 rebounds per game lead the SEC by more than four boards per game and rank second in the nation. The senior is also grabbing 5.7 offensive rebounds per game—tops in the nation. Tshiebwe’s .584 field goal percentage also ranks 39th among all Division I players.
• Senior guard Sahvir Wheeler, a 2022 All-SEC second-team selection ranks seventh in Division I with 6.3 assists per game
• According to KenPom, as a team, Kentucky is ranked 20th in the nation in adjusted offensive efficiency and 93rd in adjusted defensive efficiency.
• Prior to Tennessee’s current 25-game home win streak, the Wildcats were the last opposing team to exit Thompson-Boling Arena with a win. Kentucky defeated No. 19 Tennessee on Feb. 20, 2021, 70-55.

SERIES HISTORY & NOTES
• The Kentucky series is UT’s oldest and most-played among SEC opponents. The Vols and Wildcats first met on Feb. 5, 1910, and have clashed 235 times over the years.
• No program in college basketball has logged more wins over Kentucky than Tennessee (77).
• Tennessee has 16 all-time wins over the Wildcats at Thompson-Boling Arena, including victories in five of the last seven.
• Kentucky is one of only two SEC schools (Alabama) to lead its all-time series against the Volunteers.
• Four Tennessee All-Americans were Kentucky natives: Allan Houston, Chris Lofton, Danny Schultz and Paul “Lefty” Walther.
• On Saturday, John Calipari will coach his 35th career game against the Vols. No active collegiate head coach has faced Tennessee more.
• Since Calipari returned to the college game in 2000-01 with Memphis, Tennessee has dealt him 15 losses. No team has more wins over Calipari-coached teams during that span.
• The Volunteers under head coach Rick Barnes are 5-2 at home against Kentucky, defeating the Wildcats in Thompson-Boling Arena in 2016, 2017, 2018, 2019 and 2022.

LAST MEETING WITH KENTUCKY
•  Timely baskets in the second half and a stellar start to the game on the defensive end led Tennessee to a hard-fought win over Kentucky on March 12, 2022, in the SEC Tournament semifinals, 69-62.
•  Kennedy Chandler (now with the Memphis Grizzlies) scored a team-high 19 points for the Volunteers on 8-for-16 shooting. Zakai Zeigler had 11 points, while Josiah-Jordan James added 10.
•  Brandon Huntley-Hatfield (has since transferred to Louisville) scored eight points on 4-for-7 shooting in 22 minutes. Uros Plavsic had six points on 3-for-4 shooting and a team-high eight rebounds.
•  With Tennessee leading by 12 points with 2:40 remaining, Kentucky strung together an 11-3 run to draw within three points at 65-62—the game’s closest margin since the 16:59 mark of the first half.
•  After Kentucky cut it to three points on two TyTy Washington Jr. free throws, Chandler missed a 3-point attempt on the other end, but Santiago Vescovi grabbed a huge offensive rebound with 58.4 seconds left. The first-team All-SEC selection hit one of two free throws to push the lead back to two possessions.
•  On the ensuing Kentucky trip down the court, Tennessee forced missed 3-pointers from Keion Brooks Jr. and Kellan Grady—the latter of which was rebounded by Zeigler, who sank three of four free throws in the final 29 seconds to seal the win.

BARNES + CALIPARI = 1,500+ WINS
• Saturday’s game features the two winningest coaches (total career Division I wins) in the SEC.
• John Calipari is the league’s active leader in career wins, with 778. Rick Barnes is a close second with 768 victories to his credit.
• Among all active Division I head coaches, Calipari and Barnes rank tied for fourth and sixth, respectively, in total head coaching wins.
• Barnes and Calipari became friends while working a Pitt basketball camp in the late 1970s. The star player at that camp? Current Xavier head coach Sean Miller.

RIVALRY RECHARGED
• Since Rick Barnes‘ arrival on Rocky Top (2015), the border rivalry with the Kentucky Wildcats has been recharged in a major way.
• Barnes has led the Volunteers to a 10-7 overall record against the Wildcats, including at least one win in each of the last seven seasons.
• Since current UK coach John Calipari has been in Lexington, Tennessee is the only program to have logged wins over Kentucky for seven straight seasons.
• Tennessee is the first program to defeat Kentucky at least once for seven straight seasons since the Vols beat the Wildcats in seven straight years from 1979-85. Alabama managed an eight-year win streak over UK from 1978-85. The Vols could match that this season.
• Spanning the first seven years of the Barnes era at UT, the Vols are 5-2 against Kentucky in Knoxville, 3-4 vs. the Cats in Lexington and 2-1 against UK in neutral-site clashes at the SEC Tournament.

CONTEXTUALIZING TENNESSEE’S SUCCESS VS. UK UNDER BARNES
• From 1995-2015—a period that spanned the tenures of six UT head coaches—Tennessee’s record against Kentucky was a combined 9-33, including a 7-26 mark against ranked UK squads.
• The Vols under Rick Barnes are 10-7 vs. Kentucky over seven seasons, with a 9-5 record against ranked UK teams.
• For five of UT’s Barnes-era wins over the Wildcats, Kentucky was ranked in the top five of the AP Top 25.

CHRIS LOFTON: BORN IN KENTUCKY, MADE A LEGEND IN TENNESSEE
• Chris Lofton, the SEC’s All-Time 3-Point King, becomes UT’s fifth men’s basketball player to be permanently honored in the Thompson-Boling Arena rafters. He joins Bernard King, Ernie Grunfeld, Allan Houston and Dale Ellis.
• A native of Maysville, Kentucky, Lofton suited up for the Volunteers from 2004-08 and scored 2,131 career points—the fourth-most in program history.
• Lofton was recruited and signed by Buzz Peterson and played his final three seasons under Bruce Pearl.
• Lofton’s 431 career made threes remain an SEC record and ranked third in NCAA Division I history at the time of his departure from Tennessee.
• Despite undergoing cancer treatments between his junior and senior years, Lofton authored a senior campaign that earned him a spot on the 2008 Wooden All-America Team. He completed his degree in 2010.
• Look for several noteworthy names to be in attendance Saturday to witness Lofton’s banner raising.

COMPREHENSIVE EXCELLENCE
• Tennessee’s men’s hoops squad isn’t the only team enjoying routine success on Rocky Top.
• During the 2021-22 academic year, Tennessee won the SEC Men’s All-Sports Trophy and finished second in the SEC Women’s All-Sports standings. The Vols and Lady Vols captured five SEC team titles in 2021-22.
• Tennessee teams currently ranked in their respective national top 25 polls include baseball (preseason No. 2), men’s basketball (No. 5), football (No. 6), men’s swimming & diving (No. 6), men’s tennis (No. 6), men’s golf (No. 7), women’s swimming & diving (No. 14), men’s cross country (No. 20) and women’s tennis (No. 24).
• Tennessee football defeated No. 7 Clemson in the Capital One Orange Bowl on Dec. 30, 31-14. With that triumph, the Vols’ 2022 season featured victories over three of the previous four national champions.