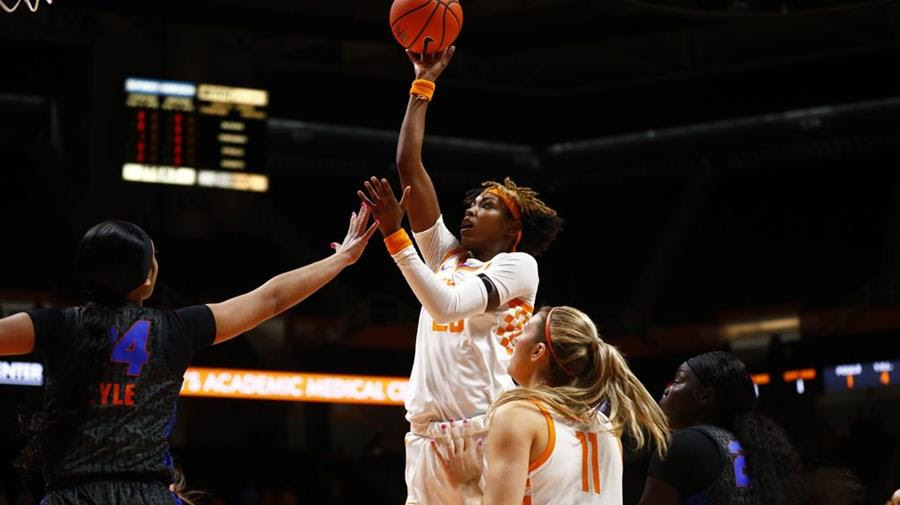 KNOXVILLE, Tenn. – Tennessee used a 26-16 third-quarter burst to pull away and claim a 74-56 victory over Florida in Thompson-Boling Arena on Thursday night to remain undefeated in Southeastern Conference women’s basketball play.

The Lady Vols won their eighth straight game and opened 7-0 in SEC play for the second year in a row. Those league starts are the best by UT since opening 13-0 in 2014-15.

Seniors Rickea Jackson and Jordan Horston led UT (15-6, 7-0 SEC), with Jackson turning in a game-high 16 points and Horston logging a double-double of 14 points and 10 rebounds.

UF (12-7, 1-5 SEC) was led by Ra Shaya Kyle and Kirsten Deans with 13 points each. Alberte Rimdal, who had 21 points the last time these squads met, was limited to 10 this time around.

Tennessee picked up two offensive rebounds on its first possession before Horston converted on a short jumper to get the Big Orange on the board 45 seconds into the game. A minute later, Florida took its first lead off a layup by Faith Dut. The Lady Vols tied it up twice before Florida went on a 7-2 run to lead 15-10 with under a minute left in the first. Jasmine Franklin hit a pair of free throws to cut it to two, and Jasmine Powell got off a three at the buzzer with a chance to tie the game, but the shot missed long, and the Gators took a 15-12 lead into the second quarter.

Jackson hit a layup and Jordan Walker followed it with another on UT’s next possession to give the Lady Vols a one-point advantage just over a minute into the second period. The Gators reclaimed the lead once more before Tennessee launched into a 9-0 run set off by a Darby trey that put the Lady Vols on top by a margin of eight with 2:32 left in the half. Deans pulled the Gators within five with a long-range 3-pointer at the 1:40 mark, and she would trim the deficit down to four on UF’s next possession with an old-fashioned three-point play. Darby scored the last points of the half with a layup off an entry pass from Horston to set the halftime score with UT leading 31-25.

The Gators opened the second half with a 5-2 run over the first minute and a half to pull within three, but Horston scored on consecutive plays to jump start a 9-0 run that had the Lady Vols ahead by 12 at the 6:28 mark. UF cut it back to single digits twice over the next three minutes, but eight unanswered points had Tennessee up 16 at the 2:09 mark. Kyle ended the drought for UF with a layup, but UT responded with back-to-back buckets by Jackson and Powell to lead by 18 with a minute left in the quarter. Dut converted on a pair of free throws before the horn sounded, and the game went into the final frame with Tennessee leading 57-41.

The Lady Vols opened the fourth with an 8-2 run to lead by 22 with 6:07 left in the game. Nina Rickards hit a trey a minute later to pull the Gators within 19, but a pair of free throws by Franklin had UT back up by 21 in less than 30 seconds. Florida strung together four straight points from the free-throw line, but a pair of buckets by Justine Pissott in the closing minutes moved the score to 74-54 with 1:24 to play. The Gators logged the last points of the game on a jumper by Rimdal, bringing the final score to 74-56.

UP NEXT: The Lady Vols will travel to Missouri for a 3 p.m. ET (2 p.m. CT) contest on Sunday. The game will be streamed on SECN+.

HEATING UP AFTER HALF: The Lady Vols poured in 26 points in the third quarter against Florida to turn a six-point halftime lead into a 16-point advantage by the start of the fourth. Over the last 11 contests, Tennessee has outscored its opponents in the third in all but one game and is averaging 24.7 third-quarter points. Against SEC foes, the Big Orange is averaging 23.0 ppg. in the third stanza.

CLOSING IN ON 1K: In 15 minutes of action, Jasmine Franklin racked up six boards, pulling her career total to 997 rebounds.

DOUBLE-DOUBLE FOR JORDY: Jordan Horston recorded 14 points and 10 rebounds against Florida to log her fifth double-double of the season and 18th of her career.

FLIPPING THE SCRIPT ON TURNOVERS: In Gainesville on Dec. 29, Tennessee committed 23 turnovers and surrendered 27 Florida points off turnovers. On Thursday night in Knoxville, the Lady Vols handled Florida’s aggression much better, committing only six miscues and giving up only four points off turnovers. That total of four tied for the second fewest allowed this season. The six turnovers also tied for the second fewest of the year.

TAKING ADVANTAGE OF SECOND CHANCES: Tennessee tallied 20 second-chance points vs. the Gators, marking the fourth time in seven SEC games the Lady Vols have hit that mark. They had scored 20 or more points off the boards only twice in non-conference play.

GETTING DEFENSIVE: After holding Florida to 56 points and 32.8 percent shooting, the Lady Vols have now held their last three foes to those numbers and below.  UT previously limited Texas A&M to 50 and 30.2, while holding Georgia to 55 and 30.2.