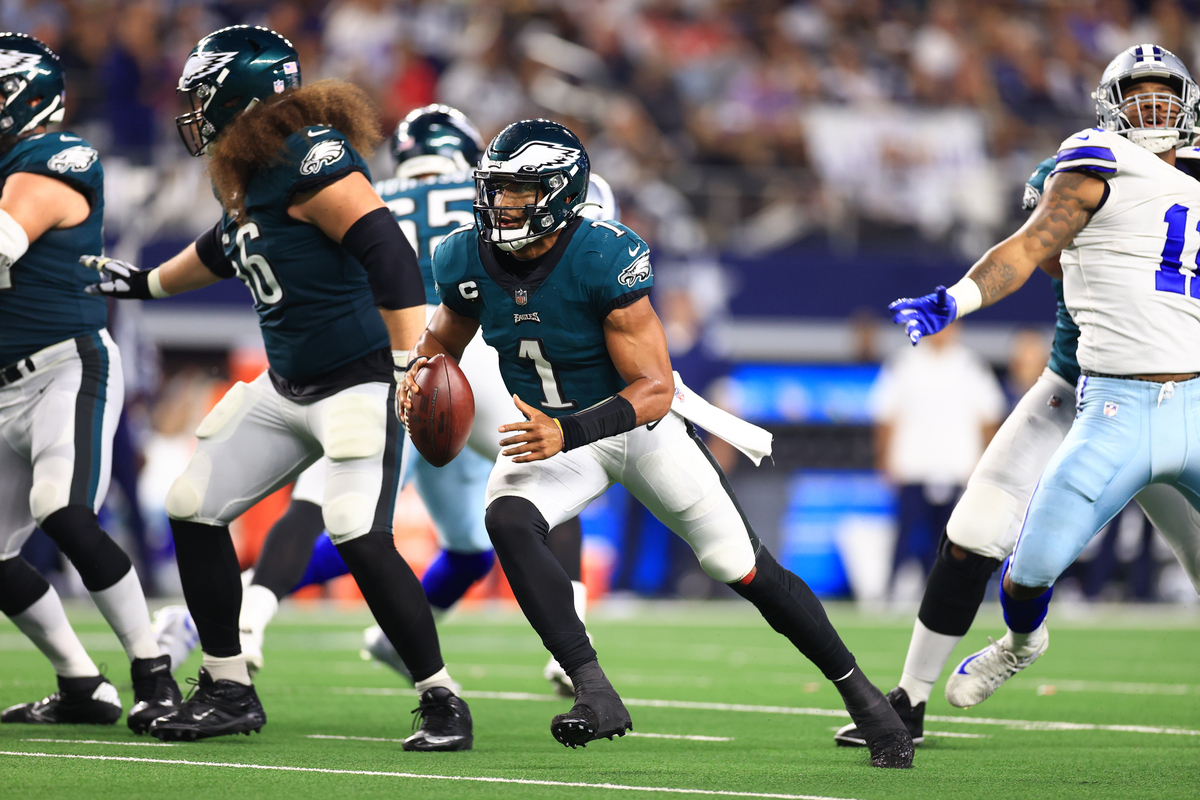 Below is the game schedule with my NFL Divisional Round Playoff game predictions. Winners straight-up are in bold. The line is my pick against the spread.

​The NFL has finalized the schedule of sites, dates, and times for the Divisional Playoffs, presented by Intuit TurboTax, on January 21-22.

The AFC and NFC Championship Games, presented by Intuit TurboTax, will take place on Sunday, January 29:

Two things can be true.

And credit the college scouting and coaching staffs of the remaining organizations that have drafted and developed the core of their rosters. Looking at the final eight teams, from Prescott and EZEKIEL ELLIOTT in 2016 to BROCK PURDY, the final selection in 2022, each of the past seven drafts are well represented in this week’s Divisional Round.

This week’s Divisional Round also features the well-rested KANSAS CITY CHIEFS and PHILADELPHIA EAGLES, the respective No. 1 seeds in the AFC and NFC. But beware: Since the beginning of the 2018 playoffs, No. 1 seeds in the postseason are a combined 7-8 (.467) with zero Super Bowl victories over the past four years.

For a seventh consecutive season, at least two teams have advanced to the Divisional Playoffs that missed the postseason the year before, including JACKSONVILLE and the NEW YORK GIANTS this season. Could one of those teams continue a remarkable march?

Storylines abound. The countdown is on. Strap in for one of the best weekends of the year.

The Starting 11 entering the 2022 Divisional Playoffs…

1.     STAY IN YOUR SEAT: Twelve of the last 13 postseason games have been within one score in the fourth quarter, including five of six Wild Card contests last week.

2.     NUMBER OF THE WEEK – 4: The number of teams over the past five postseasons (2017-21) that finished last or tied for last in their divisions and rebounded with a berth in their conference championship games. Both JACKSONVILLE and the NEW YORK GIANTS can join that group this week. The four previous teams to accomplish it: The Cincinnati Bengals and San Francisco 49ers in 2021, and the Jacksonville Jaguars and Philadelphia Eagles in 2017.

3.     ROAD SWEET ROAD: Road teams in NFL Divisional Playoff games have won four of the last five games, dating to Tampa Bay’s win at New Orleans in the last contest of the 2020 Divisional Round.

5.     SPOTLIGHT – TEAM MATCHUP: Also in that Sunday Divisional Playoff finale, when DALLAS (13-5) squares off with SAN FRANCISCO (14-4) at Levi’s Stadium (6:30 PM ET, FOX, FOX Deportes), the teams will tie an NFL record by meeting in a ninth postseason game. The only other pairs of teams to meet nine times in the NFL playoffs are the Cowboys and Los Angeles/St. Louis Rams, and the 49ers and Green Bay Packers.

6.     STREAK SPEAK: Chiefs running back JERICK MCKINNON has scored a touchdown in six consecutive games. His nine receiving touchdowns this season matched the highest mark by a running back in the Super Bowl era, tying Pro Football Hall of Famer MARSHALL FAULK (nine touchdown receptions in 2001), CHUCK FOREMAN (nine in 1975) and LEROY HOARD (nine in 1991).

7.     DID YOU KNOW?: Jacksonville quarterback TREVOR LAWRENCE is 41-0 on Saturdays since his sophomore season in high school. He was 3-0 on Saturdays over his final three years at Cartersville (Ga.) High School and 36-0 in three seasons at Clemson (his two college losses were on Monday and Friday). He’s also 2-0 so far in his NFL career (each of the last two Saturdays). Lawrence and the Jaguars face a third consecutive win-or-go-home Saturday game this week.

9.     TREND TIME: Since the Eagles captured consecutive division crowns in 2003 and 2004, the NFC East has had a different champion each of the past 18 seasons (2005-22). It’s the longest stretch ever without a repeat division winner.

10.  THIS WEEK IN NFL HISTORY: Jan. 17, 1993 (30 years ago) – In the NFC Championship Game at Candlestick Park, STEVE YOUNG guides San Francisco on a nine-play, 93-yard drive, culminating in a 5-yard touchdown pass to JERRY RICE. The march cuts the Dallas lead to 24-20 with 4:22 remaining in the fourth quarter. Faced with whether to run time off the clock in conservative fashion or push the ball downfield, Dallas head coach JIMMY JOHNSON tells offensive coordinator NORV TURNER he wants to score. So, on the ensuing play from scrimmage, Turner calls “896 F Flat.” When TROY AIKMAN reads blitz at the line, he realizes ALVIN HARPER on a post route is his best option. Harper races 70 yards to the San Francisco 9-yard line, setting up a Cowboys touchdown that cements a 30-20 victory and a berth in Super Bowl XXVII, the Cowboys’ first Super Bowl title under owner, president and general manager JERRY JONES.

11.  AND LAST BUT NOT LEAST: San Francisco’s BROCK PURDY (selected with the 262nd and final choice of the 2022 NFL Draft) isn’t the only late-round gem who will be in action at this week’s Divisional Playoffs. Other notable “Day 3” selections drafted and developed by their teams expected to make significant contributions this week:

DOMINANT DEBUTS: Three of the eight starting quarterbacks in the Divisional Playoffs, presented by Intuit TurboTax, made their postseason debuts last week in historic fashion.

New York Giants quarterback DANIEL JONES became the first player in NFL history with at least 300 passing yards (301), two touchdown passes (two) and 70 rushing yards (78) in a playoff game in New York’s victory at Minnesota. Jacksonville quarterback TREVOR LAWRENCE passed for 288 yards and four touchdowns in the Jaguars’ 27-point comeback victory over the Chargers and became the sixth quarterback ever with at least four touchdown passes in his first-career playoff start. In San Francisco’s victory over Seattle, BROCK PURDY became the first rookie quarterback ever with four total touchdowns (three passing, one rushing) in a playoff game and had the most passing yards (332) by a player making his first career playoff start since 1937.

Lawrence and Purdy can join SCOTT BRUNNER as the only players ever with at least three touchdown passes in each of their first two career playoff games.

Additionally, Jones and Purdy can join MARC BULGER, Pro Football Hall of Famer DAN FOUTS, MATT HASSELBECK and MATTHEW STAFFORD as the only players ever with at least 300 passing yards in each of their first two playoff games.

The rookie quarterbacks to start and win a Divisional Round playoff game in NFL history:

CHIEFS KINGDOM: The KANSAS CITY CHIEFS will be making their 2022 postseason debut this week after winning their seventh-consecutive AFC West division title and earning a first-round bye as the AFC’s No.1 seed.

Head coach ANDY REID has led Kansas City to each of the past four AFC Championship Games, after leading Philadelphia to five NFC Championship Games earlier in his career. With a win on Saturday, he will become the third head coach in NFL history to appear in 10 Conference Championships, joining BILL BELICHICK (13) and Pro Football Hall of Famer TOM LANDRY (10).

Reid has 19 career postseason wins and can tie Landry (20) for the second-most in NFL history. Only Belichick (31) has more.

The head coaches with the most career postseason wins in NFL history:

The players with the most postseason games with at least three touchdown passes in NFL history:

Mahomes’ top target in his career has been tight end TRAVIS KELCE, as they have connected on 11 postseason touchdowns over the past five years. With another touchdown between the pair, they will tie the Pro Football Hall of Fame tandem of JOE MONTANA and JERRY RICE (12 touchdowns) for the second-most postseason touchdowns between a quarterback-receiver pairing in NFL history. Only TOM BRADY and ROB GRONKOWSKI (15) have more.

The quarterback-receiver pairings with the most postseason touchdowns in NFL history:

Kelce enters the 2022 postseason with at least 95 receiving yards in each of his past six playoff games, the longest such streak in NFL postseason history. In 15 career playoff games, he has totaled 106 receptions for 1,291 yards and 12 touchdowns.

The players with the most postseason receiving yards in NFL history:

The players with the most postseason touchdown receptions in NFL history:

Saturday’s meeting will mark the first playoff matchup in NFL history in which both starting quarterbacks each had at least 600 rushing yards in the regular season and the fifth with each having at least 500 rushing yards.

The postseason games featuring two starting quarterbacks each with at least 500 rushing yards in the regular season in NFL history:

Philadelphia’s defense led the NFL with 70 sacks this season, tied for the third-most by a team in the regular season in NFL history. With three sacks on Saturday night, the Eagles will surpass the 1985 New York Giants (72 sacks) and 1983 Los Angeles Raiders (72) for thefourth-most sacks by a team in a single season, including playoffs, in league history.

The teams with the most sacks in a season in NFL history, including playoffs:

CINCINNATI STARS: The CINCINNATI BENGALS are aiming for their second-consecutive AFC Championship Game appearance and fourth overall in franchise history.

Last year, quarterback JOE BURROW – who was selected with the No. 1 overall pick in the 2020 NFL Draft – became the third quarterback selected in the first round to start a Super Bowl within his first two seasons in NFL history.

Wide receiver JA’MARR CHASE led the team with nine receptions for 84 yards and a touchdown in Cincinnati’s victory over Baltimore last week, marking his fifth-consecutive playoff game with at least five receptions.

With five catches on Sunday, Chase will become the fourth player in NFL history with at least five receptions in each of his first six career playoff games, joining LARRY FITZGERALD, DEANDRE HOPKINS and WES WELKER.

The players with the most postseason receiving yards in their first two career seasons in NFL history:

TOP BILLING: The BUFFALO BILLS are aiming for their second AFC Championship Game appearance in the past three years and can improve on their 13-1 home playoff record since 1970 when they host Cincinnati on Sunday (3:00 PM ET, CBS/Paramount+).

The players to reach 20 touchdown passes in the fewest postseason games in NFL history:

The players with at least 100 receiving yards and a touchdown reception in the most consecutive postseason games in NFL history:

The franchises with the most postseason victories in NFL history:

Last week in their win at Tampa Bay, Dallas quarterback DAK PRESCOTT recorded 305 passing yards and five total touchdowns (four passing, one rushing). It marked his fourth-consecutive postseason game with a rushing touchdown, the longest streak by a quarterback in NFL history.

The players with the most postseason games with both a touchdown pass and a rushing touchdown in NFL history:

If he accomplishes the feat again on Sunday, McCaffrey will become the fourth player ever with at least 100 scrimmage yards and a touchdown in each of his first three career playoff games, joining Pro Football Hall of Famer TERRELL DAVIS, LARRY FITZGERALD and ARIAN FOSTER. He can also join RICKY WATTERS as the only running backs ever with a touchdown reception in three consecutive postseason games.