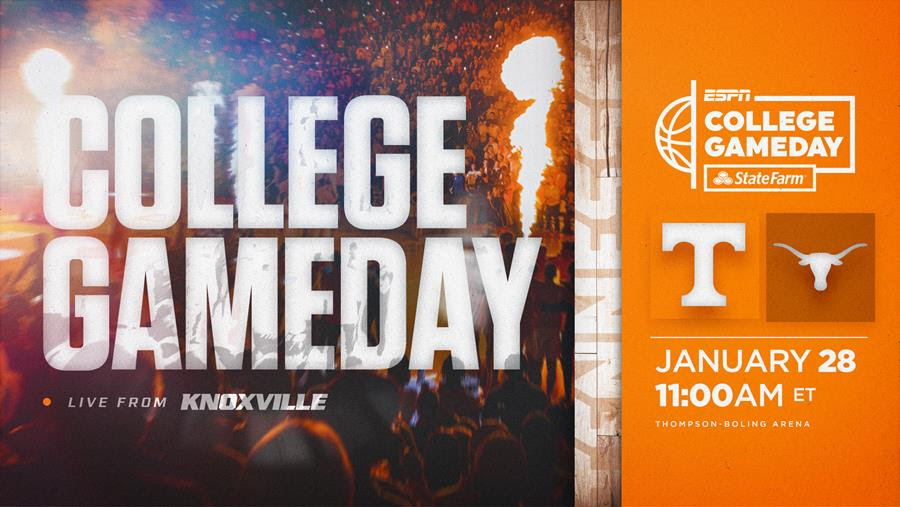 Fans can begin lining up to be part of the live audience starting at 7 a.m. ET. UT students are asked to lineup at the student gate, while general fans will enter at Gate D. Both gates will open at 9:30 a.m. ET, and game tickets are not required to take part in Saturday morning’s in-arena festivities. Free parking will be available in the G10 garage, directly east of the arena. Vehicles must be cleared from the garage by 1 p.m. ET, with digital parking permits required for re-entry.

“We can’t wait for Vol Nation to show up and show out for College GameDay,” Vols senior Josiah-Jordan James said. “We already know Tennessee has the best fanbase on the planet. Saturday is going to be an awesome opportunity to showcase that.”

The arena will be cleared when College GameDay signs off to prepare for the 6:05 p.m. ET tipoff against Texas. The game also will air on ESPN, with Dave O’Brien, Dick Vitale and Kris Budden calling the action. A sold-out crowd of 21,678 is expected for what projects to be a top-10 showdown.

In a unique twist, the women’s hoops edition of College GameDay is broadcasting from Thompson-Boling Arena two days earlier to highlight the Lady Vols’ clash with UConn Thursday. The show begins at 7 p.m. ET, followed by the game at 8 p.m. ET—both on ESPN.

The Volunteers are 3-3 all-time in basketball games for which College GameDay is on-site, having played in four featured road games (at Memphis, at Kentucky twice and at Kansas).

This past fall, Tennessee twice hosted College GameDay’s football show on the Ayres Hall lawn outside of Neyland Stadium.