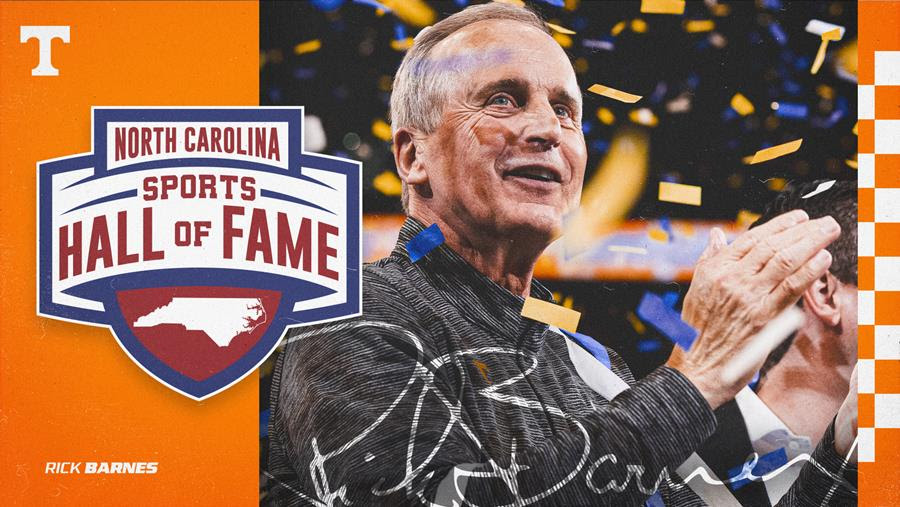 The North Carolina Sports Hall of Fame has announced that Tennessee basketball coach Rick Barnes has been selected as a member of its 2023 induction class. Barnes is a native of Hickory, North Carolina, and graduated from Lenoir-Rhyne University in his hometown.

“Candy and I have always taken great pride in being born and raised in Hickory, North Carolina,” Barnes said. “And having grown up in it, we’re very aware of the state’s incredible sports tradition and history. The North Carolina Sports Hall of Fame is a ‘Who’s Who’ of legendary figures—many of whom I’ve looked up to.

“To be selected as a coach, much of the credit needs to go to having outstanding staff members at my side throughout my career and wonderful players along the way.”

Barnes will be enshrined during the 59th annual Induction Celebration on Friday, April 21, at the Raleigh Convention Center, starting at 7 p.m. ET. A news conference will be held earlier that day at 2 p.m. ET at the convention center.

“This year’s class joining the North Carolina Sports Hall of Fame once again reflects the great variety and rich sports heritage that the hall highlights for our state,” Dr. Jerry McGee, president of the hall’s Board of Directors, said. “This group and their collective accomplishments in specific areas, from great athletes to highly successful coaches to special contributors, create another exciting chapter for the hall. We are extremely excited about honoring these outstanding individuals in our induction celebration.”

Barnes has established himself as one of the nation’s most consistently successful college basketball coaches. Prior to taking the reins at Tennessee in 2015, Barnes served head-coaching stints at George Mason, Providence, Clemson and Texas.

His 770 career Division I victories rank sixth among all active coaches and 16th all-time. Barnes has led three different programs to the Sweet Sixteen and two programs—Texas and Tennessee—to a No. 1 national ranking.

Barnes was named the Naismith National Coach of the Year in 2019 after leading Tennessee to a
school-record-tying 31 victories and four weeks atop the national polls.

He and his wife, Candy (also a Hickory native), have made significant philanthropic contributions in their hometown over the years, including longstanding support of the YMCA of Catawba Valley, Young Life Hickory, East Hickory Church, Hickory High School and Lenoir-Rhyne University.