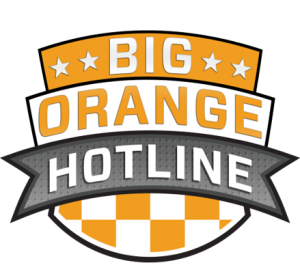 KNOXVILLE, Tenn. — The Vol Network’s “Big Orange Hotline” football season radio show airs at 8 p.m. Eastern / 7 p.m. Central each Monday across the state of Tennessee live from the patio at Dead End BBQ restaurant on Sutherland Avenue in Knoxville. You can listen to the show in Knoxville and East Tennessee on FM 99.1 and AM 990 The Sports Animal (WNML.)

The Vol Network’s Bob Kesling hosts the show and will be joined each week by former Vol quarterbacks Pat Ryan and Jeff Francis. Numerous special guests and former Vols will visit the restaurant and be on the show this season. Entering its 12th season, “Big Orange Hotline” is a weekly, one-hour, prime time Tennessee football preview show presented and hosted by Dead End BBQ.

In addition to interviews, calls and discussion, each week’s show will also feature a scouting report on Tennessee’s next football opponent.

Fans can call in and ask questions by dialing 1-800-688-8657 (VOLS) or Tweet questions to @VolNetwork_IMG, #AskVolNetwork. Fans are encouraged to check their local listings for the close to 20 Vol Network affiliates in the state that carry “Big Orange Hotline”. The show can also be heard online at utsports.com and on the UT GameDay App.

Dead End BBQ is an award-winning unique American neighborhood barbecue restaurant located at 3612 Sutherland Avenue in Knoxville. Voted one of America’s top 100 barbeque restaurants, Dead End BBQ’s menu has tons of options…from Ribs to Brisket to Pork, Chicken, and Sausage. More information and directions can be found at www.deadendbbq.com.