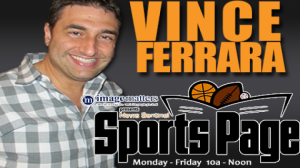 The “News Sentinel Sports Page brought to you by Image Matters” is one of the most unique sports talk shows in the country. You won’t find a show with as many different co-hosts and personalities as this show. Each weekday host Vince Ferrara is joined by a different writer or columnist from one of the country’s most successful and accomplished newspapers, the Knoxville News Sentinel. The different daily co-hosts bring new perspectives, fresh opinions, years of credibility, varying personalities, targeted expertise and unmatched insight on University of Tennessee and local sports. The guys will have the latest on the SEC, college football, NFL and national sports. Plus, the show interacts heavily with you the sports fan to hear what you have to say about the Vols or anything else in sports. Each day the show has a new sound with the right blend of breaking news, information, educated opinions and fun. We bring the years of sports coverage experience of the Knoxville News Sentinel to the radio, desktop or mobile device. Listen to the last show on our podcast page. Thanks for checking out the News Sentinel Sports Page and interacting with us.

joined Sports Radio WNML as the daily host of the “News Sentinel Sports Page” in October of 2010. He’s a Tampa native and a graduate of USF. Vince has worked in radio, television and in sports in Dallas, New Orleans, Orlando, Tampa, Birmingham/Tuscaloosa, Denver and Knoxville one previous time. He’s also worked as a game reporter/show guest for CBS Sports Radio (current), ESPN Radio, Fox Sports Radio and SiriusXM.

You’ll hear Vince fill-in frequently on our afternoon drive show on Sports Radio WNML, “SportsTalk”, for John or Jimmy. Vince is the play-by-play voice for the high school football game of the week on AM 990. You’ll hear him on the Vol Network as well on the U. of Tennessee football pre-game show, basketball half-time show and UT baseball full-game broadcasts. He’s also an occasional guest panelist on The Sports Source TV show Sunday at 11am on WATE-TV 6. Vince is the lead MMA commentator on pay-per-view events for Valor Fights which also air Saturday nights at 11 on FOX43. Plus, he’s a SEC and National Sports Blogger for Examiner.com.

Senior Columnist – Editorial/Sports (Since 2007)
John Adams is one of the most accomplished columnists in the country. He’s won countless sports writing awards throughout his career. John has been named Columnist of the Year in the state of Tennessee 16 different years. He has been a newspaper columnist in Jacksonville, Baton Rouge, Jackson (MS), Shreveport and Knoxville. John has covered many of the major sports championships in the US. John is recognized for his entertaining, thought-provoking style and his unique humor. He is a graduate of Louisiana State University.

Sports Writer – Editorial/Sports (Since 2009)
Mike Strange grew up in Frankfort, Ky., and holds degrees from Georgetown College and the University of Kentucky.

He worked at newspapers in Middlesboro, Ky., and Owensboro, Ky., but then decided to try a non-boro and joined the News Sentinel in 1983. After one year on the Lady Vols beat, he has covered University of Tennessee football and men’s basketball since 1984. Among his favorite events are the Final Four, the Kentucky Derby and just about any bowl game (warm weather preferred). The Maui Invitational wasn’t bad, either.

Mike lives in South Knoxville, enjoys the mountains and bicycling. He has a daughter who is a UT grad and a son who aspires to be.

Sports Writer – Editorial/Sports (Since 2014)
Chris Thomas is the high school sports editor for the Knoxville News Sentinel. He returns to KNS after a two-year stint at the Jackson Clarion-Ledger, where he covered prep sports statewide. Thomas also previously worked for Alabama Media Group, servicing the print products for The Huntsville Times, The Birmingham News and Mobile Press-Register. He is a 2011 graduate of the University of Tennessee, and a 2007 graduate of Sevier County High School.

Sports Reporter – Editorial/Sports (Since 2016)Rhiannon Potkey started covering Tennessee football during the 2016 season. Before joining the News Sentinel, she spent 17 years covering all levels of sports, including USC and UCLA, for the Ventura County Star (Calif.) and covering BYU for the Salt Lake Tribune. She graduated from UC Santa Barbara in 2002 with a degree in psychology. She was born in New Hampshire and grew up in Ventura, Calif., playing basketball, soccer, softball and tennis.

Lynyrd Skynyrd Big Wheels Keep on Turnin’ Tour With special guest Tesla Thompson-Boling Arena Tickets on sale Friday, June 11th at 10am local time at knoxvilletickets.com. There will be a pre-sale on Thursday, June 10th at 10a-10p local time w/ the password “crowd”.

Listen to SportsTalk this week for your chance to win $25 to Edwin Watts Golf Shop in Turkey Creek!

Tune into Sports 180 with Josh and Heather June 14th – 18th.  Call in with your best “Dad Jokes” when Josh asks for them for a chance to win tickets to the Tennessee Smokies and get qualified for the “Daddy” of prizes.  A $100 Gift Card to Dick’s Last Resort and a Chattanooga Whiskey Prize Pack including a Hat, Whiskey Glass, and T-shirt plus a tour for two to the Chattanooga Whiskey Distillery and a 1 night stay at the Moxy Hotel in Chattanooga!

Juneteenth…An obscure holiday to many in America. But for African Americans, the word Juneteenth sparks happiness, joy, and celebration.

Big Ticket has returned for the 2021 season! Find out how you can win a Tennessee season ticket package from 99.1 The Sports Animal, Food City and Adrenaline Shock!