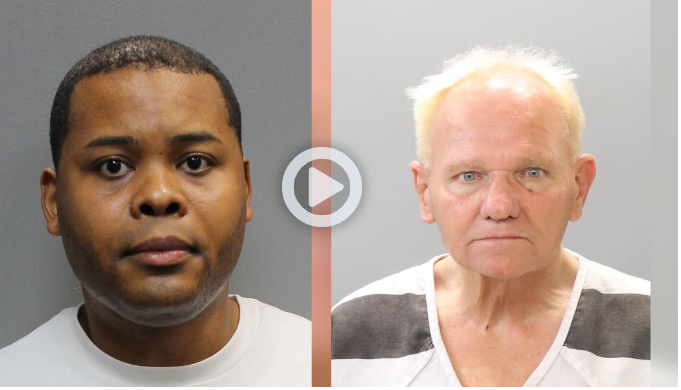 Two caregivers were charged on Tuesday after they allegedly dragged a vulnerable adult across a driveway back in March, according to a report obtained by WVLT News.

Jakolby Stigall, 32 of Knoxville, and Elbert Sharp Jr., 72 of Knoxville, were working as caregivers at the Sertoma Center. A fellow staff member reported that the two men had abused and failed to report the abuse of their client, a vulnerable adult living at a supportive living home.

The victim has cerebral palsy, heart failure, scoliosis and a seizure disorder, the report said. Knox County Sheriff’s Office officials said he is considered “moderately intellectually disabled.” His speech is impaired, and he needs help with his daily living activities.

Video surveillance on March 17 found both suspects attempting to get the victim out of the facility’s transport van. The report said one of the suspects dragged the victim by his legs across the driveway.

A Knox County Sheriff’s Office deputy stated that neither Stigall or Sharp reported the incident and “appeared to attempt to cover it up.”

After the staff member reported the incident, Adult Protective Services officials visited the home and discovered a large red area on the victim’s back that looked like dry scratches and scrapes, according to the report.

Stigall and Sharp were charged with failing to report elder or vulnerable adult abuse. The investigation is still ongoing, the report said.