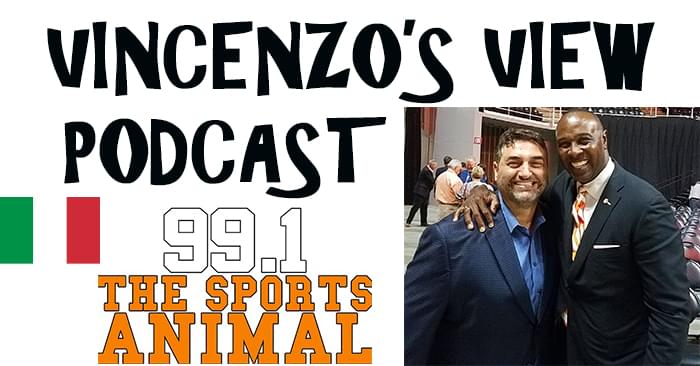 99.1 The Sports Animal host Vince Ferrara interviews a wide range of sports guests locally and nationally. You often hear him on SportsTalk either as a frequent fill-in co-host for John or Jimmy, as a weekly guest from 4 to 5pm ET on the show or with the show airing his compelling interviews.

The “Vincenzo’s Views Podcast” features all of Vince’s interviews, his weekly hour on SportsTalk with John Wilkerson and Jimmy Hyams, and coming soon…a website exclusive short sports talk show with Vince’s opinions on the University of Tennessee, the SEC and national sports.

The “Vincenzo’s Views Podcast” plays to his blog name here on the website, “Vince’s Views.” Listen to all his interviews and show appearances and podcast specials in the archive below.

Vince is a Tampa, Florida native and University of South Florida graduate, In addition to being a show host and play-by-play announcer for high school football, he holds numerous on-air roles for the Vol Network including Baseball Play-By-Play Announcer/Color Analyst, Football and Basketball Pregame Reporter and Basketball Halftime Reporter and more. Vince is also a Play-By-Play Announcer for the SEC Network’s digital platform “+” for multiple sports. In addition, he’s the Lead Commentator/Play-By-Play Voice for regional MMA on pay-per-view.

Vince is a frequent guest on radio and TV shows in various markets to share insight on the Vols, SEC, MMA, Boxing and national sports. In Knoxville, you can see Vince as a guest panelist on the highly rated Sunday morning TV sports talk show, The Sports Source, hosted by John Pennington and airing on WATE-TV Channel 6 from 11am to 12:30pm.

Watch and listen to broadcast samples of Vince HERE.